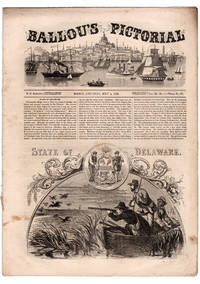 by Ballou, Maturin M. and Durivage, Francis A. [Editors]

Boston: Ballou, M.M., 1856. First Edition . Soft cover. Very Good. Elephant Folio - over 15" - 23" tall. From Engravings. Very Good. Boston: M.M. Ballou, 1856. The July 5, 1856 issue, Volume XI, No.1, Whole No. 261. Thirteen illustrations from engravings. Expansive Elephant folio size, sewn newsprint wraps, 16 pp. Very Good, the inevitable moderate age-toning and occasional moderate foxing spots being the only notable flaws. Much less edge wear than is typical, as well. See scans. A sturdy example. Maturin Ballou's paper was quite supple, not at all fragile, and it shows. Sharp, healthy, well-preserved. This issue contains stories, articles, and / or the diverse and now somewhat legendary engravings. Here, there are 13 sizable engravings - including a very large (nearly full page) engraving of the corner of Court and Tremont streets in Boston, 'with the new iron building'. They include as well the masthead (nameplate) graphic, a State of Delaware scene (drawn and engraved 'expressly for the Pictorial' by Billings), two engravings of the Holy Land - Edom and Nazareth, four Australian wilderness scenes, a portrait of poet and publisher James T. Fields, the 'New Capital of Kansas at LeCompton City', and two large engravings of circus performer scenes on the rear cover. Most of the non-fiction articles relate to these illustrations, and there are always a few that have no illustration. Several of this periodical's typical short stories and serialized fiction are generally within (e.g.: 'The Gipsey's (sic) Secret- The League of Guilt', two chapters in this issue), as well, and the issue is always spiced with a few poems, news shorts, and/or classified ads (occasionally illustrated with engravings themselves). Maturin Ballou's 16-page newsprint periodical was already a piece of American history when he, as managing editor of Gleason's Pictorial, bought that - the first successful illustrated weekly newspaper in America - from owner Frederick Gleason in 1855. This issue is a nicely preserved one issued of those executed under Ballou's editorship and management. See scans. LLng3

New
A new book is a book previously not circulated to a buyer. Although a new book is typically free of any faults or defects,...[more]
First Edition
In book collecting, the first edition is the earliest published form of a book. A book may have more than one first edition in...[more]
folio
A folio usually indicates a large book size of 15" in height or larger when used in the context of a book description....[more]