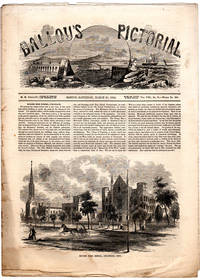 Boston: Ballou, M.M., 1855. First Edition . Self-wraps [newspaper]. Very Good. Elephant Folio - over 15" - 23" tall. From Engravings. Boston: M.M. Ballou, 1855. First Edition. The March 31,1855 issue, Volume VIII, No. 13, Whole No. 195. Numerous illustrations from engravings. Elephant folio size, sewn newsprint wraps, 16 pp. A strong Very Good Plus; other than modest occasional darkening to places on the covers (see scans),not much to point to here. See scans. High grade. Maturin Ballou's paper was quite supple, not at all fragile, and it shows. Sharp, healthy, well-preserved. This issue contains stories, articles, and / or the diverse and now somewhat legendary engravings - regarding as follows: Hughes High School, Cincinnati (text and one large engraving); "Secrets From the Cells, or, Leaves From My Diary" (continuation, part four, by Rev.J.H. Ingraham); "A Modern Belle's Career" by Mrs. E. Wellmont; A lengthy article on Arabs, with five impressive engravings; Empire of Burmah, by Dr. J.V.C. Smith; Bertrand de Born, by Carl Rupert; a lengthy piece on the Boston Athenaeum, with four large engravings of that edifice, inside and out; the equally lengthy "Sketch of the War in the East", in general coverage of the Ottoman Wars and the Russo-Turkish Wars of the time; medium bio piece, with engraving, on Cornelius Vanderbilt; an engraving of the New Steam Fire Engine of Boston; a rather dazzling page of text and four nice engravings of wildlife, "Illustrations of Natural History"; "City Sketches", the entire back cover filled with engravings of diverse Boston inhabitants; and of course a number of short editorials, news pieces, poems, and ads. Please see all scans. Maturin Ballou's 16-page newsprint periodical was already a piece of American history when he, as managing editor of Gleason's Pictorial, bought that - the first successful illustrated weekly newspaper in America - from owner Frederick Gleason in 1855. An early issue under this name. lLng1

leaves
Very generally, "leaves" refers to the pages of a book, as in the common phrase, "loose-leaf pages." A leaf is a single sheet...[more]
First Edition
In book collecting, the first edition is the earliest published form of a book. A book may have more than one first edition in...[more]
folio
A folio usually indicates a large book size of 15" in height or larger when used in the context of a book description....[more]
New
A new book is a book previously not circulated to a buyer. Although a new book is typically free of any faults or defects,...[more]