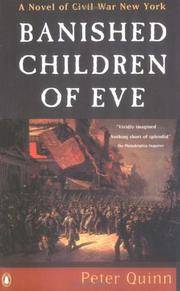 New York U. S. A.: Penguin. Very Good 1995. Softcover. Marfree, tight early prtg, covers creased looks unread not marked-in, underscored, clearance or discard. Mails from NYC usually within 12 hours. ; 7.7 x 5 x 1.5 inches; 624 pages; \nFrom Publishers Weekly Quinn's remarkably accomplished debut is a historical saga set in New York in the summer of 1863. Copyright 1995 Reed. From Library Jour: Set in New York City during the Civil War years, this first novel echoes with Stephen Foster songs and the disparate voices of its teeming throngs of citizens while focusing on the experience of Irish Catholic immigrants. Quinn offers a strong, imaginative, and well-researched examination of the life of common people in that time through portraits of hucksters, minstrel actors, speculators, soldiers, and domestic servants whose lives touch. Their stories, set against a background of emigration, war, gangs, racism, stock exchange crashes, shanty towns, draft resistance, prostitution, strikes, and the manipulation of the uneducated masses to embrace a national interest, suggest that characterization of any past as "the good old days" is always a matter of who's doing the talking. Thoroughly enjoyable, educational, and highly recommended for fiction collections. - Sheila Riley, Smithsonian Inst. Libs. , Washington, D. C. Copyright 1994 Reed. .