Home R. J. A. PAXTON-DENNY. THE BANZAI HUNTERS - The Small Boat Operations That Defeated the Japanese,1944-5. 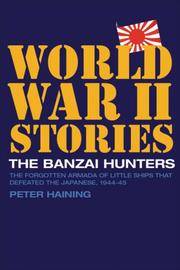 THE BANZAI HUNTERS - The Small Boat Operations That Defeated the Japanese,1944-5.

THE BANZAI HUNTERS - The Small Boat Operations That Defeated the Japanese,1944-5.

UK,8vo HB+dw/dj,1st edn.[Complete number line 10 - 1 descending.] FINE+/FINE.No owner inscrptn and no price-clip to dw/dj - though front inner flap of same with an accidental,vertical but narrow folded crease to it's length.Bright,crisp,clean, matt, monochrome photograph superimposed to a wrap-around red+ khaki motif of Japanese sun-striped flag illustrated background dw/dj design with b/w lettering to front+spine,rear panel with thumbnail b/w photograph and white text; with negligible shelf-wear or creasing to edges and corners - one small closed tear/split at rear,lower corner,no other nicks,tears or splits present.Head+foot of spine/backstrip with minimal bumping and reciprocal creasing.Top+fore-edges bright and clean; contents bright,tight,clean,solid and sound - virtually pristine - no dog-ear reading creases to any pages' corners,appears unread - apart from my own collation.Bright,crisp,clean,sharp-cornered, publisher's original plain black cloth bds with impressed letters to spine/backstrip,and immaculate plain dark brown eps.UK,8vo HB +dw/dj,1st edn,1-192pp [paginated] includes a preface,12 chapters and epilogue,16pp contemporary b/w photographs etc.,in 2 blocks of 8pp apiece,between pp88/9 and pp104/5 respectively,a biblio,acknowledgements,and an index,plus [unpaginated] half-title+title pages,contents list/table with a b/w regional (Burma) map to it's reverse,an epigraph with Louis Mountbatten (Supreme Allied Commander) signatured,b/w facsimile 'Order of the Day' document to it's reverse and 8pp blanks at the rear of the book.
Commanded by the brilliant but unorthodox General WJ 'Bill' Slim,the British 14th - known now as the 'Forgotten Army' - took on the Japanese entrenched in Burma in 1944.A vital mission, Slim's bloody,tense and fraught victory on the mainland would never have been achieved were it not for the dispatching of heroic Army and Navy soldiers who stole quietly along the rivers and onto the islands along the eastern coast of Burma to open the way for a strategic turning point - as vital as El Alamein in the Western Desert or the D-Day landings in Normandy.
Battling against the hated Japanese,as well as some of the deadliest insects, animals and diseases known to man,in the thick,dense jungle of the Arakan,units of the Royal Marines and Royal Navy were helped by a motley collection of daring seamen.
It is these men - these Banzai Hunters - who fought for every inch of the Arakan coast in amphibious and covert attacks on land,to engage the Japanese on a second front while the troops of the Allied 14th Army in India struck south to retake Burma.Like the exploits of the soldiers of the 'Forgotten Army' - so named because their story has always taken second place to the achievements in Europe - it is also a little episode and has been compiled from a mixture of official documents, contemporary reports and the recollections of those who were there.
Together these men from all over the British Commonwealth engaged in a vital campaign of audacity and courage in the dangerous waterways,hostile stretches of swamp and jungle and all along the coast of the Arakan that has earned them the enduring epithet The Banzai Hunters,and a place in military history.
Since April 2013 and again in March 2015,and in this year too, the UK Post Office has altered it's Pricing in Proportion template, altering it's prices,weight allowances,dimensions and lowered it's qualifying compensation rates too!
So,please contact rpaxtonden@blueyonder.co.uk ,because of the weight/value of this item for correct,insured shipping/P+p quotes - particularly ALL overseas buyers - BEFORE ordering through the order page!

edges
The collective of the top, fore and bottom edges of the text block of the book, being that part of the edges of the pages of a...[more]
bds
Common term for the covers of a hardbound book.  The term 'boards' refers to the thick cardboard under the paper or cloth...[more]
Biblio
The Greek root for a variety of words referring to the book, such as bibliography, bibliomania, etc. Also, one of the world's...[more]
number line
A series of numbers appearing on the copyright page of a book, where the lowest number generally indicates the printing of that...[more]
Cloth
"Cloth-bound" generally refers to a hardcover book with cloth covering the outside of the book covers. The cloth is stretched...[more]
facsimile
An exact copy of an original work. In books, it refers to a copy or reproduction, as accurate as possible, of an original...[more]