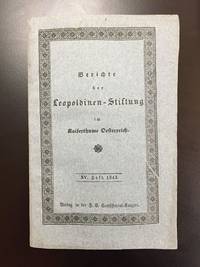 Vienna, 1842. First Edition. Very good. 8vo. (200 x 130 mm). 88 pp. + 1 folding letterpress table recording donations. Original blue printed wrappers. With a 14-page letter on German Catholic immigrants to Philadelphia, Pittsburgh, and provincial Pennsylvania. In this unassuming and almost completely unknown journal are many communications from Catholic missionaries to North America, including is a forgotten 25-page letter from Pierre Jean De Smet, S.J. , describing his first mission to the Flathead in western Montana. This marks the beginning of one of the longest-lived Catholic missions to Indians in the United States. The Flathead had petitioned the Church for years to send a "Blackrobe," and De Smet was received with enthusiasm. The present letter contains a good deal of information not published elsewhere. De Smet wrote this letter to his bishop, Rosati of St. Louis; it is different from the letter he wrote to the Jesuit Superior General Jan Roothan that was subequently published in the "Annales de la Propagation de la Foi." Is was inexplicably omitted from De Smet's "Letters and Sketches: With a Narrative of a Year's Residence Among the Indian Tribes of the Rocky Mountains" (1843). Â

This 15th issue of the "Berichte" is futher interest as it contains two letters (14 pages) from Francis Patrick Kenrick, bishop of Phildelphia, describing in detail the growth of Catholicism in Pennsylvania, particularly the ministry to the continuing influx of Germans; brief letters from the new bishops of Natchez (John Chanche) and Vincennes, Indiana (CÃ©lestine de la HailandiÃ¨re). NB: On his arrival in Natchez, Chanche was one of two priests in his diocese, which comprised the entire state of Mississippi (!) Â

Additionally there are two letters (10 pages) from Arbre Croche, Michigan, by Franz Pierz, protege of Frederic Baraga and fellow Slovene; an eight-page extract of a letter from John Hughes, coadjutor bishop (later archbishop) of New York, to Johann Georg Schwarz, U.S. consul in Vienna. Called "Dagger John" by the Protestant press for the cross in his signature and his aggressive personality, Hughes was a major force in American Catholicism and a champion of his fellow Irish until his death in 1864. In response to the patently unconstitutional involvement of Protestantism in the tax-supported, privately-run public schools of New York City, he sought public funding for Catholic schools. It is this situation that he describes in this letter. (When this effort failed, he established a Catholic school system for the city.) Â

The Leopoldinen-Stiftung (Leopoldine Society) was founded in Vienna in 1829 to encourage financial and moral support in the Austro-Hungarian Empire for Roman Catholic missionary efforts in North America. The impetus came from Bishop Edward Fenwick of Cincinnati, Ohio, who sent his vicar-general, Frederick ResÃ©, on a trip to Europe in 1827 to raise money and recruit priests for North American missions. The Society functioned in a fashion similar to the Society for the Propagation of the Faith in France (and to American Protestant mission organizations as well), collecting small donations from large numbers of parishioners throughout the Empire in order to provide missionary support. The "Berichte" [Reports] were essentially newsletters for contributors, providing news of the challenges and successes in the mission field to inspire more contributions. The letterpress table bound at the end of the text records such donations for the year 1841. Ours appears to be the only copy on the market.

New
A new book is a book previously not circulated to a buyer. Although a new book is typically free of any faults or defects,...[more]
First Edition
In book collecting, the first edition is the earliest published form of a book. A book may have more than one first edition in...[more]
foi
former owner's intials.
wrappers
The paper covering on the outside of a paperback.  Also see the entry for pictorial wraps, color illustrated coverings for...[more]