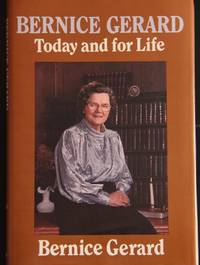 Bernice Gerard: Today and for Life

Bernice Gerard: Today and for Life

U.S.A.: Gr Welch Co Ltd, 1988. 1st Edition . Hardcover. New/New. 8vo - over 7¾ - 9¾" tall. . Handsome book ; chocolate brown faux leather over boards with Gold gilt title impressed on spine and front; in matching jacket with color photograph of Bernice as alderwoman on front, and smaller photo of her in front of microphone on Radio station CJOR 600 on back; cover design by Marilyn Baker. Inside the book are 226 pages , illustrated with 4 pages B&W matte photos, 6 pics in all, of: reproduction of Vancouver Sun newspaper carton from 1977 lampooning Bernice's stint as an alderman ; Bernice leading a silent walk past nude sunbathers on Wreck Beach and Spanish Banks, Vancouver ( only one nude man is visible in this pic, and he is sitting on a driftwood log with his back to the camera ) ; Bernice preaching at Seoul Full Gospel Church with Pastor Yonggi Cho ; with Malcolm and Kitty Muggeridge on the Walk for Life at Parliament Hill, Onttawa, 1973 ; photo of huge Vancouver billboard of Bernice planting a treee in Israel ; and B&W photo of front cover pic inside title page. Bernice Gerard has led a fascinating life and this is her autobiography. It is the story of a Christian woman who came from 'nobody, nowhere', and achieved success in the public arena as an evangelist , university chaplain, alderwoman , pastor, and founder of Fraserview Assembly; and became a radio and television personality and tireless campaigner on many issues of private and public morality. Throughout the book are lively anecdotes from her private life and her ministry; from the nudist beach near Vancouver, to the pro-life demonstrations in Ottawa, and pro-Israel support in Canada, to guest hosting on 100 Huntley Street, she travelled the world, preaching, lecturing, and participating in many inter-denominational conferences and ecumenical events. Whether on her own radio call in show, or as a frequent guest on religious television programmes, she proved with the way she lived her life that evangelicals can combine their private faith and social action to become the genuine 'salt of the earth'. Courageous , controversial, and profoundly spiritual, her background true story is as fascinating as a novel, from the true tragic tale of her mother about to give birth being rushed down the Fraser River on a fishing boat, and dying shortly after Bernice was born on Christmas Eve; to her adoption by a full blooded Native Indian woman who lived with a fishing community up the Fraser; to her identity crisis while a young girl, growning up an orphan, 'nobody's child', to her fight for religious freedom. She joined with sisters Jean and Velma McColl to form the McColl-Gerard Trio, evangelical crusaders who preached throughout North America, Europe, the Middle East and Asia, and went on to live her own life all the while reaching out to others. Bernice's story is an inspiration to women - and men - of all denominations. Bernice was instrumental later in life in forming the Shiloh Society for co-op housing for families and seniors in and around Vancouver, the city she had reclaimed as home, and where she died at the age of 84, in 2008. ( Note that some of the background information of her early life has been taken by her from her earlier ( 1956 ) publication :' Converted in the Country'; there is some overlap with early info from that book, which was about her life up to 1956. ) This book is : " Today and for Life " by Reverend Bernice Gerard ; published by Welch Publishing , Burlington Ontario Canada 1988 Ha

Seller rating:
This seller has earned a 5 of 5 Stars rating from Biblio customers.
Biblio.com member since 2019
WESTBANK, British Columbia
Ask Seller a Question

Established 1983. All genres of used books.

jacket
Sometimes used as another term for dust jacket, a protective and often decorative wrapper, usually made of paper which wraps... [More]
title page
A page at the front of a book which may contain the title of the book, any subtitles, the authors, contributors, editors, the... [More]
gilt
The decorative application of gold or gold coloring to a portion of a book on the spine, edges of the text block, or an inlay in... [More]
spine
The outer portion of a book which covers the actual binding. The spine usually faces outward when a book is placed on a shelf.... [More]