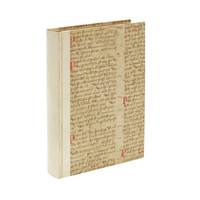 Frankfurt: Christoff Raben, 1582. Second edition. Three parts in one, small 4to (19.5 x 14.5 cm), pp.[xvi], 123, [1, blank], [ii], 161, [3, blank], 176, [6], [2, blank], each part with separate title, first title printed in red and black, all three with woodcut vignettes. A very good copy bound in modern vellum-backed boards. All edges red. Some spotting and occasional staining to text. Leonhard Rauwolf, botanist and physician, travelled through the Ottoman world from 1573 to 1575, in pursuit of medicinal plants, subsidised by the Augsburg trading firm of Melchior Manlich, his brother-in-law, on the understanding that he would act as physician to the firm's agents in the east. He visited Tripoli, Aleppo, Raqqa, Baghdad, and Jerusalem, collecting specimens from gardens, bazaars, and in the wild. His herbarium, with some 200 16th-century pressed specimens, is now held by the University of Leiden. The doctor's description of coffee preparation and consumption at Aleppo is the first printed. He described coffee berries, their preparation, and circles of seated Turks drinking coffee, "black as ink" and piping hot, from ceramic bowls. He related these berries to the "buncho" of Avicenna and the "bunca" of Rhazes, and noted that Turks held coffee in the same regard which Germans reserved for vermouth and herbal wines. A devout German Lutheran, he viewed the relative religious pluralism of the Ottoman Empire with skepticism verging on contempt. But his scholarly rigor ensured that his accounts of the different beliefs and practices of those he met are detailed and valuable. He spent much more time in the Levantine interior and Iraq than the majority of Europeans whose travelogues were published in this period; he visited the Maronites of Mount Lebanon, and treated a Maronite patriarch. On the whole, his sympathies lie more with the eastern Christians he encounters than Muslims or Jews. This is a most unusual European account of the Ottoman world in the 16th century: Rauwolf was a doctor, not a diplomat, and his travels followed the course of commerce, not diplomacy. The first edition was published at Lauingen in 1582; a fourth part with botanical illustrations, was published at Lauingen in 1583. This Frankfurt edition is rarer than the first edition. Von Hunersdorf & Hasenkamp, p.1221, for the Lauingen edition.

First Edition
In book collecting, the first edition is the earliest published form of a book. A book may have more than one first edition in...[more]
edges
The collective of the top, fore and bottom edges of the text block of the book, being that part of the edges of the pages of a...[more]