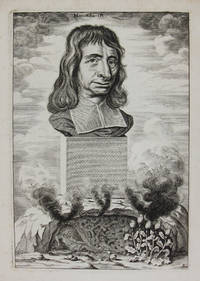 First full and authorized edition of Balthasar Bekker's landmark work of demonology, spirit stories, comparative religion, modern biblical exegesis, and Cartesian metaphysics, complete with the rare allegorical frontispiece portrait and bound with a pamphlet from the Cassis of Amsterdam condemning Bekker (see below). Bekker was a Dutch Reformed pastor and theologian, born in Friesland in 1634, educated at Groningen, and based in Amsterdam from 1679 to his death in 1698. Bekker's first major work, DE PHILOSOPHIA CARTESIANA ADMONITIO CANDIDA & SINCERA (Wesel, 1668), established his position that the theologian and the natural philosopher (or "scientist," in today's terms) represent two distinct domains of knowledge, neither of which should be understood with the other's mode of inquiry.

In DE BETOWERDE WEERELD (the title translated into English alternately as "The World Bewitch'd" and "The World Turn'd Upside-Down"), his most famous work, Bekker explores concepts and accounts of the Devil, demonic possession, witches, and spirits across world religions, episodes in the Bible, European legends, and recent events. Using Cartesian thought, the hermeneutical principle of accommodation, and general empricial evidence, Bekker concludes that the notion of the Devil having power in the natural world is merely a remnant of pagan religion, misreading of the Bible, and result of superstition: it threatens the radical monotheism of the Abrahamic faiths, contradicts reason, and often results in catastrophe, including the burning of supposed witches. The work was fully translated into French and German within one year and two years, respectively, of the Dutch publication of its final book in 1693, and immediately caused an uproar. The Dutch Reformed Church in Amsterdam stripped Bekker of his position as minister because of the controversy (while maintaining his salary), but as Anna E. C. Simoni of the British Library wrote in 1980, "in the end his compassion for persecuted old women and his defence of God-given reason as a necessary part of religion, of equal importance with faith itself, carried the day." While considered one of the most important works of the early Enlightenment, THE WORLD BEWITCHED never became as well known in the English-speaking world as in continental Europe, as only the first book of the four was ever published in English translation, first as THE WORLD BEWITCH'D in 1695, then as THE WORLD TURN'D UPSIDE DOWN (introduced with a later summary of all four books), in 1700.

Before Bekker had completed editing his first two books, they were printed and, without his permission, distributed by Hero Nauta in Leeuwarden. Bekker rejects that piracy a notice on the verso of the first book's half title and warrants the publication of the present work with his manuscript signature in all four books. The first volume of the present set was bound contemporaneously with a scarce 11-page pamphlet ARTICULEN TOT SATISFACTIE ... (Amsterdam: Gerardus Borstius, 1692) issued by the Classis of Amsterdam rejecting Bekker's defense of his first two books and suspending him as a minister of the church.

The set is complete with the rare frontispiece portrait of Bekker by Frisian pastor and artist Johannes Hilarides (1649-1726), captioned, "Monothe-ist" and showing Bekker's head on a brick pedestal above poppies and and a cavern, both emitting smoke and winged demons; inside the cavern lies Morpheus surrounded by "phantasmata."

The interesting provenance marks of this set begin with the contemporary ownership inscription, "C. V. D. Hell. Sans fin," in both volumes, evidently the Dutch nobleman and amateur natural historian Casijn (or Cazijn) van der Hell (1644-1672). More recently, the set was inscribed in the first volume as a gift to "Dr. S. H. Spanjaard" in 1961 "Uit dankbaarheid [with gratitude]" by an unknown donor. Salco Herman Spanjaard (1904-1971) was a Dutch pastor and theologian of Jewish heritage who had been forced into hiding during the Nazi occupation of the Netherlands in World War II.

verso
The page bound on the left side of a book, opposite to the recto page.
spine
The outer portion of a book which covers the actual binding. The spine usually faces outward when a book is placed on a shelf....[more]
marginalia
Marginalia, in brief, are notes written in the margins, or beside the text of a book by a previous owner.  This is very...[more]
half title
The blank front page which appears just prior to the title page, and typically contains only the title of the book, although, at...[more]
leaves
Very generally, "leaves" refers to the pages of a book, as in the common phrase, "loose-leaf pages." A leaf is a single sheet...[more]
soiled
Generally refers to minor discoloration or staining.
edges
The collective of the top, fore and bottom edges of the text block of the book, being that part of the edges of the pages of a...[more]
title page
A page at the front of a book which may contain the title of the book, any subtitles, the authors, contributors, editors, the...[more]
A.N.
The book is pristine and free of any defects, in the same condition as ...[more]
Parchment
Pages or book covering made from a prepared animal skin. Parchment describes any animal skin used for books, while vellum is a...[more]
quarto
The term quarto is used to describe a page or book size. A printed sheet is made with four pages of text on each side, and the...[more]
inscribed
When a book is described as being inscribed, it indicates that a short note written by the author or a previous owner has...[more]