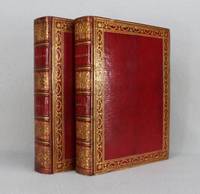 by (BINDINGS - BOZERIAN). BIBLE IN LATIN

Paris: Excudebat Fr. Amb. Didot, 1785. 318 x 235 mm. (12 1/2 x 9 1/4"). Two volumes. SUPERB CRIMSON STRAIGHT-GRAIN MOROCCO BY BOZERIAN, covers with distinctive wide frame incorporating arches, Grecian urns, and floral garlands (Culot roll #49), sunburst cornerpieces (Culot stamp #15), the outer and inner edges of the frame flanked by thick and thin gilt rules and cresting (Culot roll #12) and floral (Culot roll #29) rolls; double raised bands separated by a gilt-tooled inlaid strip of black morocco, spines densely gilt in "mille étoiles et points" compartments filled with much foliage and many flowers against a stippled background (Culot, plate IX), turn-ins with interlacing flame roll (Culot roll #16), light green glazed endpapers, all edges gilt. Front pastedowns with wood-engraved bookplate of Ellic Howe and with faint evidence of earlier bookplate removal; verso of rear flyleaf with small engraved heraldic book label. Bibelsammlung der Württembergischen Landesbibliothek I, D1639. Cf. Darlow & Moule 6263. For the binding: Culot, "Jean-Claude Bozerian." Half a dozen or so faint scratches or small spots to boards, a little vague crinkling to spine, occasional mild browning or small marginal spots, a couple of gatherings in second volume with faint overall browning, otherwise an excellent copy internally, clean and smooth with generous margins, and THE ELEGANT BINDINGS IN FINE CONDITION, especially lustrous and with only insignificant wear. Although unsigned, these handsome volumes are certainly Bozerian work; they not only typify the refined bindings executed by both the elder Bozerian and Bozerian le jeune during the last decade of the 18th and first two decades of the 19th century, but they also share tools identified by Paul Culot as belonging to Jean-Claude Bozerian. Particularly characteristic are the spine panels featuring intricate gilt elaboration spreading out from a center point (in this case a five-petaled flower), a design Culot calls "mille étoiles et points," or 1,000 stars and dots. The urn and garland roll used on the covers, designated roll #49 by Culot, is identical to that on a binding from the Charles Ramsden collection (British Library shelfmark c156k1) signed by Bozerian, and also appears on a signed red straight-grain morocco binding done for C. M. de Talleyrand-Périgord (De Ricci, Schiff Collection 170). The Schiff binding also uses the same flame roll tool for the turn-ins, and (like our volumes) items 161-63 by Bozerian senior in the Schiff collection all show the same distinctive strip of dark morocco inlaid between raised bands and decorated with a chain-pattern roll-tool. Our edition of the Vulgate was printed by François-Ambroise Didot (1730-1804), son of the founder of the prestigious Didot printing house. François-Ambroise introduced several innovations in type design (for example, making the contrast between thick and thin letters more noticeable); he improved punch cutting and mold making; and he introduced the practice of distinguishing types by their point size (12-point type, 36-point type, etc.). The present work was printed on the highly finished wove paper Didot introduced in 1780, a stock similar to that used by Baskerville. Former owner Ellic Howe (1910-91) was a professional printer who wrote a number of works on typography. In 1982, he revealed that he had been the director of Britain's forgery operations during World War II, charged with preparing false documents for agents being sent behind enemy lines.

raised band(s)
Raised bands refer to the ridges that protrude slightly from the spine on leather bound books.  The bands are created...[more]
verso
The page bound on the left side of a book, opposite to the recto page.
bookplate
Highly sought after by some collectors, a book plate is an inscribed or decorative device that identifies the owner, or former...[more]
gilt
The decorative application of gold or gold coloring to a portion of a book on the spine, edges of the text block, or an inlay in...[more]
fine
A book in fine condition exhibits no flaws. A fine condition book closely approaches As New condition, but may lack the...[more]
spine
The outer portion of a book which covers the actual binding. The spine usually faces outward when a book is placed on a shelf....[more]
edges
The collective of the top, fore and bottom edges of the text block of the book, being that part of the edges of the pages of a...[more]
plate
Full page illustration or photograph. Plates are printed separately from the text of the book, and bound in at production. I.e.,...[more]
Gatherings
A term used in bookbinding, where a gathering of sheets is folded at the middle, then bound into the binding together. The...[more]
morocco
Morocco is a style of leather book binding that is usually made with goatskin, as it is durable and easy to dye. (see also...[more]