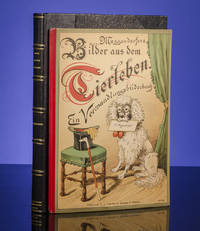 Quarter red cloth over full-color pictorial boards. Publisher's original dust jacket printed in black. An extraordinary copy with all original movable parts in full working order, in extraordinarily fine condition. Complete with the unbelievably rare brown paper printed dust jacket with just a few small chips and slight edge loss, but not affecting any text. This is the only Meggendorfer in a printed dust jacket that we have ever seen. Housed in a quarter black morocco clamshell case.

Only four copies in institutional holdings worldwide, with two copies in Germany and two in the U.S., according to OCLC/KVK.

Meggendorfer created all of the pictorial elements of his books himself in pen and watercolor drawings. He then assembled the book in dummy form and had outline lithographs executed, which he hand-colored to serve as guides for the color printing.

"Meggendorfer's reputation today is based almost solely on his ingenious mechanical picture-books for children. These he began to design during the late 1880s, and many of these books went into multiple German editions besides translations into English, French, Italian, Spanish, Bohemian, Hungarian, and Russian. Deservedly, he is considered the creator and chief innovator of moveable toy books, and his printed works are eagerly sought after by collectors of historical children's literature. He produced books with moveable figures, transformation pictures segmented into three parts and thus interchangeable, books with pop-up designs, rotating wheels as well as four-panel slat pictures which change the illustrations through movement, and simply funny picture books for children that would certainly make them laugh and generally contributed to some educational benefit" (Justin G. Schiller's Introduction to The Publishing Archive of Lothar Meggendorfer. Original drawings, hand-colored lithographs and production files for his children's book illustrations. Offered for sale by Justin G. Schiller, Ltd. (New York, 1975)).

"There is little doubt that the most elaborate and ingenious movables ever produced were those of the German Lothar Meggendorfer (1847-1925) made during the 1880s and 1890s...the mechanisms and operations of Meggendorfer's books-not to mention the originality of his figures-are far superior to any others published before or since. The devices that operated the various figures in Meggendorfer's books consisted of a series of inter-connecting cardboard levers sandwiched between the coloured illustration on the front of the oblong leaf and the dummy pasted behind it. The animated limbs and heads were cut-out models on the front of the picture, and moving the tab set the whole scene in motion" (Haining, Movable Books, pp. 65-73).

Cloth
"Cloth-bound" generally refers to a hardcover book with cloth covering the outside of the book covers. The cloth is stretched...[more]
jacket
Sometimes used as another term for dust jacket, a protective and often decorative wrapper, usually made of paper which wraps...[more]
morocco
Morocco is a style of leather book binding that is usually made with goatskin, as it is durable and easy to dye. (see also...[more]
G
Good describes the average used and worn book that has all pages or leaves present. Any defects must be noted. (as defined...[more]
quarto
The term quarto is used to describe a page or book size. A printed sheet is made with four pages of text on each side, and the...[more]
fine
A book in fine condition exhibits no flaws. A fine condition book closely approaches As New condition, but may lack the...[more]