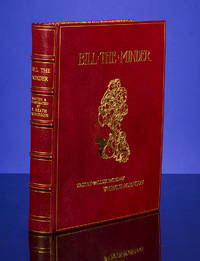 Edition de Luxe. Limited to 380 numbered copies (this copy being No. 192), signed by the author/artist.

From the early 1970s through the early 1990s I had a few hundred books bound specially for me (E. Joseph) by Zaehnsdorf of London who were later taken over by Sangorski & Sutcliffe. Zaehnsdorf already had several of the original front cover blocks for these limited editions and over the years we had many more cut for the signed limited Rackhams, Dulacs, Nielsens, Robinsons etc, etc.

"In Bill the Minder Heath Robinson really found himself. The story is a simple tale or a series of tales about the wanderings of the King of Troy and a boot-cleaner called Bill, who became the Minder (today he would be called a baby-sitter) to the bad-tempered family of a bad-tempered mushroom-gatherer named Crispin. Like most of Heath Robinson's characters, Bill was a solemn little person who took his minding very seriously, even to the extent of studying at the British Museum and in the Minding Room of the Patents Museum at South Kensington. Soon his fame as a Minder spread and he found himself minding a large flock of children. One day they were out in the fields, being minded by Bill, they found an eccentric old man in a haystack. It was the King of Troy, who had been banished from his country. With Bill's assistance, the children set out on a journey, and through a series of adventures they restore this unworldly old gentleman to his throne. In the process they meet some very droll characters. These are the substance of some of Heath Robinson's wittiest drawings" (Lewis, p. 102).

leaves
Very generally, "leaves" refers to the pages of a book, as in the common phrase, "loose-leaf pages." A leaf is a single sheet...[more]
gilt
The decorative application of gold or gold coloring to a portion of a book on the spine, edges of the text block, or an inlay in...[more]
top edge gilt
Top edge gilt refers to the practice of applying gold or a gold-like finish to the top of the text block (the edges the...[more]
morocco
Morocco is a style of leather book binding that is usually made with goatskin, as it is durable and easy to dye. (see also...[more]
raised band(s)
Raised bands refer to the ridges that protrude slightly from the spine on leather bound books.  The bands are created...[more]
quarto
The term quarto is used to describe a page or book size. A printed sheet is made with four pages of text on each side, and the...[more]
edges
The collective of the top, fore and bottom edges of the text block of the book, being that part of the edges of the pages of a...[more]
fine
A book in fine condition exhibits no flaws. A fine condition book closely approaches As New condition, but may lack the...[more]
spine
The outer portion of a book which covers the actual binding. The spine usually faces outward when a book is placed on a shelf....[more]