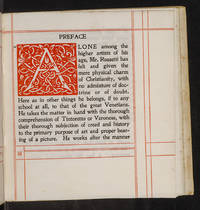 Portland, Maine: Thomas B. Mosher, 1901. One of Ten Copies Printed on vellum
With Ten Fine Initial Letters Printed in Red and Black

First Variorum Edition. One of Ten Copies Printed on Vellum (this being No. 2), with Designs by Charles Ricketts.

The photogravure frontispiece is after the author's 1874 portrait of Alexa Wilding for Lord Mount-Temple.

Publishers vellum over boards, spine lettered in gilt (gilt somewhat faded), remains of original tan silk ties. Spine a little discolored and with minimal loss to extreme top, otherwise a wonderful copy. The Arthur A Houghton copy with his bookplate on rear paste-down.

The text is here printed as it first appeared in the February 1850 issue of The Germ with, neatly printed below, the variants present in the 1856 Oxford and Cambridge Magazine, the 1870 Poems, and the 1886 Collected Works.

Bishop notes the decorative similarities between this edition and that of Hacon & Ricketts in 1900, including the "same alternating black and red Ricketts initials and text, the same red rules as the two-page openings of the book following the half-titles, and the same red Roman numerals of each stanza," although Mosher here opts for smaller type, a larger page, and different dingbats, with his printer's device prominently displayed on the title-leaf verso.

The Blessed Damozel is perhaps the best known poem by Dante Gabriel Rossetti as well as the title of some of his best known paintings. The poem was first published in 1850 in the Pre-Raphaelite journal The Germ. Rossetti subsequently revised the poem twice and republished it in 1856, 1870 and 1873.

The poem was partially inspired by Edgar Allan Poe's poem The Raven with its depiction of a lover grieving on Earth over the death of his loved one. Rossetti chose to represent the situation in reverse. The poem describes the damozel observing her lover from heaven, and her unfulfilled yearning for their reunion in heaven.

The poem also was the inspiration for Claude Debussy's La Damoiselle Ã©lue (1888), a cantata for two soloists, female choir, and orchestra.

Gabriel Charles Dante Rossetti (1828-1882), generally known as Dante Gabriel Rossetti, was a British poet, illustrator, painter and translator, and a member of the Rossetti family. He founded the Pre-Raphaelite Brotherhood in 1848 with William Holman Hunt and John Everett Millais. Rossetti was later to be the main inspiration for a second generation of artists and writers influenced by the movement, most notably William Morris and Edward Burne-Jones. His work also influenced the European Symbolists and was a major precursor of the Aesthetic movement. Rossetti's art was characterized by its sensuality and its medieval revivalism. His early poetry was influenced by John Keats. His later poetry was characterized by the complex interlinking of thought and feeling, especially in his sonnet sequence, The House of Life. Poetry and image are closely entwined in Rossetti's work. He frequently wrote sonnets to accompany his pictures, spanning from The Girlhood of Mary Virgin (1849) and Astarte Syriaca (1877), while also creating art to illustrate poems such as Goblin Market by the celebrated poet Christina Rossetti, his sister. Rossetti's personal life was closely linked to his work, especially his relationships with his models and muses Elizabeth Siddal, Fanny Cornforth and Jane Morris.

A spectacular example of an unusual printing method from an American press.

vellum
Vellum is a sheet of specialty prepared skin of lamb, calf, or goat kid used for binding a book or for printing and writing. ...[more]
fine
A book in fine condition exhibits no flaws. A fine condition book closely approaches As New condition, but may lack the...[more]
spine
The outer portion of a book which covers the actual binding. The spine usually faces outward when a book is placed on a shelf....[more]
quarto
The term quarto is used to describe a page or book size. A printed sheet is made with four pages of text on each side, and the...[more]
verso
The page bound on the left side of a book, opposite to the recto page.
paste-down
The paste-down is the portion of the endpaper that is glued to the inner boards of a hardback book. The paste-down forms an...[more]
gilt
The decorative application of gold or gold coloring to a portion of a book on the spine, edges of the text block, or an inlay in...[more]
bookplate
Highly sought after by some collectors, a book plate is an inscribed or decorative device that identifies the owner, or former...[more]
device
Especially for older books, a printer's device refers to an identifying mark, also sometimes called a printer's mark, on the...[more]