Join us October 7–16, 2022 for our upcoming virtual antiquarian book fair!
Preregister now for Biblio.live and get $10 to use at the fair.
Home Vancouver Bookseller THE BOER WAR 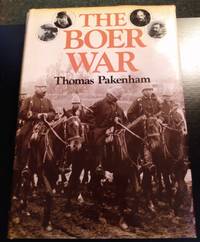 This is a mint-condition first edition of The Boer War, the 1979 masterpiece by the British historian Thomas Pakenham. First editions of this book are rare—and expensive.

This war, declared by the Boers on 11 October 1899, gave the British, as Kipling said, 'no end of a lesson'. It was the longest, costliest, bloodiest, and most humiliating campaign fought by Britain 1815 and 1914.

Thomas Pakenham's narrative is based on first-hand and largely unpublished sources ranging from the private papers of the leading protagonists to the taped recollections of survivors from both sides. It is mammoth in scope and scholarship, as well as vivid, fast-moving and breathtakingly compelling.

The Boer War is the definitive account of this extraordinary conflict - a war precipitated by greed and marked by almost inconceivable blundering and brutalities.

659 pages including 200+ illustrations, photographs, and maps.

The dust jacket, which is sepiatone anyway, has some darkening to the edges and a tiny amount of shelfwear.

The book is pristine.

The war declared by the Boers of South Africa on October 11, 1899, gave the British, as Kipling said, 'No end of a lesson.' The public expected it to be over by Christmas. It proved to be the longest, the costliest, the bloodiest and most humiliating war that Great Britain fought between 1815 and 1914.

shelfwear
Minor wear resulting from a book being place on, and taken from a bookshelf, especially along the bottom edge.
First Edition
In book collecting, the first edition is the earliest published form of a book. A book may have more than one first edition in... [More]
edges
The collective of the top, fore and bottom edges of the text block of the book, being that part of the edges of the pages of a... [More]
jacket
Sometimes used as another term for dust jacket, a protective and often decorative wrapper, usually made of paper which wraps... [More]