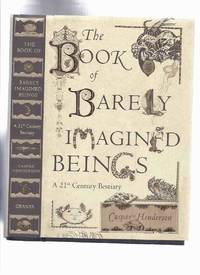 The Book of Barely Imagined Beings: A 21st Century Bestiary -by Caspar Henderson

The Book of Barely Imagined Beings: A 21st Century Bestiary -by Caspar Henderson

London, England: London, UK: Granta Publications, 2012, 1st edition, First Printing, 2012. ------------hardcover, a Near Fine example, in a Near Fine dustjacket, small nick at upper spine tip, looks new, likely unread, 427 pages, b&w photos and illustrations, ---"From medieval bestiaries to Borges’s Book of Imaginary Beings, we’ve long been enchanted by extraordinary animals, be they terrifying three-headed dogs or asps impervious to a snake charmer’s song. But bestiaries are more than just zany zoology -they are artful attempts to convey broader beliefs about human beings and the natural order. Today, we no longer fear sea monsters or banshees. But from the infamous honey badger to the giant squid, animals continue to captivate us with the things they can do and the things they cannot, what we know about them and what we don’t. -- With The Book of Barely Imagined Beings, Caspar Henderson offers readers a fascinating, beautifully produced modern-day menagerie. But whereas medieval bestiaries were often based on folklore and myth, the creatures that abound in Henderson’s book -from the axolotl to the zebrafish -are, with one exception, very much with us, albeit sometimes in depleted numbers. The Book of Barely Imagined Beings transports readers to a world of real creatures that seem as if they should be made up -hat are somehow more astonishing than anything we might have imagined. The yeti crab, for example, uses its furry claws to farm the bacteria on which it feeds. The waterbear, meanwhile, is among nature’s - extreme survivors,- able to withstand a week unprotected in outer space. These and other strange and surprising species invite readers to reflect on what we value—or fail to value—and what we might change. -- A powerful combination of wit, cutting-edge natural history, and philosophical meditation, The Book of Barely Imagined Beings is an infectious and inspiring celebration of the sheer ingenuity and variety of life in a time of crisis and change."---, any image directly beside this listing is the actual book and not a generic photo ///NOT SIGNED ---GUARANTEED to be AVAILABLE///. First Edition. Hard Cover. Near Fine (see description)/Near Fine (see description). Illus. by Golbanou Moghaddas Cover Art . 6.25w x 9.25h Inches. NOT Price Clipped.

price clipped
When a book is described as price-clipped, it indicates that the portion of the dust jacket flap that has the publisher's...[more]
New
A new book is a book previously not circulated to a buyer. Although a new book is typically free of any faults or defects,...[more]
spine
The outer portion of a book which covers the actual binding. The spine usually faces outward when a book is placed on a shelf....[more]
fine
A book in fine condition exhibits no flaws. A fine condition book closely approaches As New condition, but may lack the...[more]
First Edition
In book collecting, the first edition is the earliest published form of a book. A book may have more than one first edition in...[more]