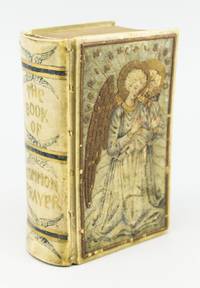 THE BOOK OF COMMON PRAYER [bound with] HYMNS. ANCIENT AND MODERN

THE BOOK OF COMMON PRAYER [bound with] HYMNS. ANCIENT AND MODERN

by CHURCH OF ENGLAND

Cambridge: Printed by C. J. Clay & Sons; London: William Clowes and Sons, ca. 1890. 146 x 87 mm. (5 3/4 x 3 1/2"). [340] leaves; 588 pp.
DELIGHTFUL ONLAID, MOLDED, AND PAINTED VELLUM BINDING BY THE ROYAL SCHOOL OF ART NEEDLEWORK, upper cover with raised bronze frame enclosing two angels in blue robes, one with molded bronze wings and nimbus, the other with gilt wings and halo, the onlaid lettering "Gloria in Excelsis Deo" in a semi-circle above them; lower cover with a simpler representation of a seraph in blue and gold; smooth spine divided into panels by blue and gold bands with emanating pairs of wings, gilt titling, all edges gilt. Upper cover with paint a bit rubbed, gilt a little dulled, and with several tiny chips to the raised border and angel wings, a hint of soiling to vellum; not as splendid as it once was, but still A DELIGHTFUL EXAMPLE retaining most of its original appeal, the binding entirely solid and with nothing approaching a fatal problem, and the text in fine state.

This binding is an amiable expression of a style that occupied a brief but important moment in the history of bookbinding, examples of which appear infrequently on the market. According to its own literature, the Royal School of Art Needlework (now Royal School of Needlework) was founded in 1872, with the expressed purpose "first, to revive a beautiful art which had fallen into decay . . . and, secondly, through its revival, to provide employment for educated women who were without the means of a suitable livelihood and who would otherwise find themselves compelled to live in poverty, or be reduced to absolute destitution." From the beginning, it had a strong Arts & Crafts connection. "It commissioned designs from leading figures in the Aesthetics and Arts and Crafts Movement including . . . William Morris, Edward Burne-Jones, Walter and Thomas Crane, G. F. Bodley, Fairfax Wade, Selwyn Image, Gertrude Jekyll, and others." Our vellum binding obviously does not involve any needlework, but volumes like the present one were bound by members of the school for about a decade, beginning in 1888. In her "Women Bookbinders," Tidcombe says that the bindings' designs were "very attractive, but the books will not take much handling, and many examples show signs of some of the paint, especially the gold, wearing off. This vulnerability is almost certainly the reason why painted vellum bindings virtually ceased to be produced about 1898." Tidcombe mentions the exhibition of such bindings at Arts and Crafts Exhibition Society events in 1889 and 1890, bookbinding exhibitions in London in 1897 and 1898, and even in America, at the Columbian Exposition in Chicago in 1893..

fine
A book in fine condition exhibits no flaws. A fine condition book closely approaches As New condition, but may lack the... [More]
vellum
Vellum is a sheet of specialty prepared skin of lamb, calf, or goat kid used for binding a book or for printing and writing. ... [More]
edges
The collective of the top, fore and bottom edges of the text block of the book, being that part of the edges of the pages of a... [More]
G
Good describes the average used and worn book that has all pages or leaves present. Any defects must be noted. (as defined by AB... [More]
gilt
The decorative application of gold or gold coloring to a portion of a book on the spine, edges of the text block, or an inlay in... [More]
spine
The outer portion of a book which covers the actual binding. The spine usually faces outward when a book is placed on a shelf.... [More]