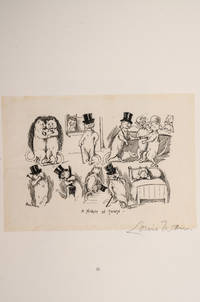 Book of Drawings, A.

Book of Drawings, A.

One of a hundred large paper copies on hand-made paper, signed by F.T.W. Davies, the plates individually signed by the illustrators. 43, [1 imprint] pp.

The two Louis Wain drawings, each of which is signed by Wain in pencil are: "A Night in Town" and [A Single Cat].

From studying the 209 entries in Rodney Dale's A List of Books Illustrated by Louis Wain, it would appear that A Book of Drawings (Dale 20, 1891) was only preceded by Madame Tabby's Establishment (Dale 141, 1886) and Dreams by French Firesides (Dale 56, 1890). We believe that the drawing "A Night in Town" is most probably the very first published Louis Wain 'multi-cat caricature'.

"Mr. and Mrs. Davies, who are well known for their unsparing efforts on behalf of the poor of St. Pancras, have issued a book of drawings with the same charitable intentions as have been displayed in their concerts. For this purpose they have secured the services of several well-known artists, who have contributed, each with his own especial style, and the result is a recherchÃ© book of pictures not often seen. The title-page is by Herbert Horne, and Mr. Austin Dobson furnishes a prefatory poem; the artists who have sent their charitable mites are W. Wilson, H. Railton, J. Jellicoe, A.T. Elwes, Louise Jopling, Joseph Pennell, H. Furniss, C. Wilkinson, A. Bryan, R.H. Moore, J.B. Partridge, Lucien Davis, Hugh Thomson, Louis Wain, and Selwyn Image, who sends a tail-piece. Anyone wishing to make a Christmas or New Year's Gift will help on the good work Mr. and Mrs. Davies are doing by sending for a book. A special large paper edition, limited to 100 copies, printed on hand-made paper, with India proofs of the drawings, and bound in parchment, will also be issued from Wilsford House, 16 Fitzroy-street, London, W., or may be obtained through Mr. Tregaskis." (The British Bookmaker. Volume V. 1891-92).

"Until 1890, Louis Wain had made little or no attempt to portray cats as anything other than fluffy animals which, though they slept between sheets, or wrote letters with quill pens, were otherwise recognisably feline. The 'Louis Wain cat' had not yet been born. But in 1890, he began to explore the possibility of the comic cat; cats drawn in human situations - or humans drawn as cats, which amount to the same thing. He insisted that he did not caricature cats, but drew them as he saw them, though his approach makes it clear that he generally saw them as humans. Naturally, then, he studied humans when drawing cats. ' If I want a mild, irresponsible caricature, a grinning cat, then I have to let loose my nature impressions and let myself go on my own account, and it is astonishing what variety one can get in this way, and how one's moods vary from day to day. I have done as many as one hundred and fifty laughing cats at a time, no two being alike. ' There is another way of sketching cats, and this way I often resort to. I take a sketch-book to a restaurant or other public place, and draw the people in their different positions as cats, getting as near to their human characteristics as possible. This gives me double nature, and these studies I think my best humorous work.' The foundations of this approach were laid in 1890. That Christmas, there appeared in Holly Leaves and the Illustrated London News 'A Cats' Christmas Dance and 'A Cats' Party, respectively...

By now, Louis Wain was a household name. He was sufficiently famous to be mentioned by M. H. Spielmann (1858-1948), the eminent Victorian artists' biographer, in his monograph on the Dutch cat-artist Henriette Ronner in which he wrote: "That after all this lapse of time her work should till lately be practically new to our metropolis is equally a misfortune to art-lovers and an injustice to the artist. We have, and have had, cat-painters of ability here in England: in Mr Couldery, Mr Walter Hunt and Mr Louis Wain we have men who understand and appreciate feline beauty and feline character... It is a mark of Louis Wain's fame that in 1890 he was elected to the Presidency of the National Cat Club, following the resignation of Mr Harrison Weir." (Rodney Dale. Louis Wain. The Man who drew Cats, pp. 26 & 29).

Parchment
Pages or book covering made from a prepared animal skin. Parchment describes any animal skin used for books, while vellum is a...[more]
Poor
A book with significant wear and faults. A poor condition book is still a reading copy with the full text still readable. Any...[more]
vellum
Vellum is a sheet of specialty prepared skin of lamb, calf, or goat kid used for binding a book or for printing and writing. ...[more]
leaves
Very generally, "leaves" refers to the pages of a book, as in the common phrase, "loose-leaf pages." A leaf is a single sheet...[more]
New
A new book is a book previously not circulated to a buyer. Although a new book is typically free of any faults or defects,...[more]
G
Good describes the average used and worn book that has all pages or leaves present. Any defects must be noted. (as defined...[more]
gilt
The decorative application of gold or gold coloring to a portion of a book on the spine, edges of the text block, or an inlay in...[more]
wrappers
The paper covering on the outside of a paperback.  Also see the entry for pictorial wraps, color illustrated coverings for...[more]
fine
A book in fine condition exhibits no flaws. A fine condition book closely approaches As New condition, but may lack the...[more]