Home R. J. A. PAXTON-DENNY. BOY SOLDIERS of the GREAT WAR: THEIR OWN STORIES FOR THE FIRST TIME. 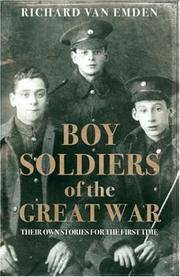 BOY SOLDIERS of the GREAT WAR: THEIR OWN STORIES FOR THE FIRST TIME.

BOY SOLDIERS of the GREAT WAR: THEIR OWN STORIES FOR THE FIRST TIME.

UK,8vo HB+dw/dj,1st edn.FINE/FINE.No owner inscrptn,and no price-clip to dw/dj.Bright,crisp,clean,matt b/w contemporary photographic illustrated dw/dj; with negligible shelf-wear and creasing to edges - no nicks or tears present - as new.Top+fore-edges bright and clean; contents bright,tight and near pristine - no dog-ear reading creases to any pages' corners - an unread copy? Bright,clean,publisher's original, plain black cloth boards with bright,crisp,stamped gilt letters to spine/ backstrip with immaculate plain white endpapers.UK,8vo HB+dw/dj,1st edn,2-340pp [paginated],half-title+title pages,contents list/ table,author introduction,15 chapters,16pp contemporary b/w photographs/illus/ newspaper cuttings etc.,in 2 blocks of 8pp apiece,between pp88/9 and pp248/9 respectively,acknowledgements,sources,an index,and 4pp blanks to rear. At the outbreak of the First World War,boys as young as thirteen were caught up in an overwhelming tide of patriotism and,in huge numbers, cheerfully joined up for active service.Between 1914 and 1918,the press,recruiting officers and the Government all contributed to the enlistment of thousands of under-age soldiers,in Britain and the Empire, despite an increasing pressure inside and outside Parliament to keep them at home. Many were to serve in the bloodiest battles of the war,such as ex-miner Dick Trafford,who took part in the Battle of Loos,and Frank Lindley,who, seeking to avenge his dead brother,went over the top on the first day of the Battle of the Somme.Both were just sixteen.Some boys were unable to stand the strain of trench life and,often through the intervention of their parents,were finally sent home,while others,such as fifteen-year-old Jack Pouchot,won medals for gallantry or became highly efficient officers,such as Acting Captain Philip Lister and Second Lieutenant Reginald Battersby,both of whom were commissioned at fifteen and,a year later,fought in France. In this ground breaking book,Richard van Emden reveals his evidence that more than a quarter of a million boys fought on the Western Front, and that girls also played a role close to the firing line,as volunteer nurses.In 'Boy Soldiers of the Great War' their stories of sacrifice and heroism are told for the first time,through the use of hitherto unpublished diaries and letters and the personal testimonies of the last survivors. Since April 2013,again in March 2015,and in this year too,the UK Post Office has altered it's Pricing in Proportion template,altering it's prices, weight allowances,dimensions and lowered it's qualifying compensation rates too! So,please contact rpaxtonden@blueyonder.co.uk ,because of the weight/value of this item for correct, insured shipping/P+p quotes - particularly ALL overseas buyers - BEFORE ordering through the order page!

Though tragic in its details, this book tells how boys as young as 12 years were able to enlist and fight (and die) in World War 1. No Birth Certificates were necessary for the first 2 years, and even many letters written subsequently by parents to the authorities were to no avail. Many boys were heroes and won medals for bravery and also made officers as early as 16! The author has researched thoroughly the experiences of many individual boys and also groups as a whole and the book is written in such a way as to be moving and informative.

Cloth
"Cloth-bound" generally refers to a hardcover book with cloth covering the outside of the book covers. The cloth is stretched...[more]
New
A new book is a book previously not circulated to a buyer. Although a new book is typically free of any faults or defects,...[more]
edges
The collective of the top, fore and bottom edges of the text block of the book, being that part of the edges of the pages of a...[more]
gilt
The decorative application of gold or gold coloring to a portion of a book on the spine, edges of the text block, or an inlay in...[more]