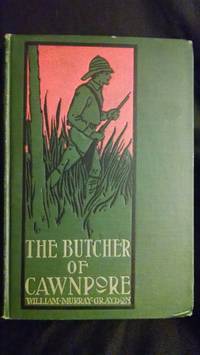 THE BUTCHER OF CAWNPORE

THE BUTCHER OF CAWNPORE

NEW YORK: STREET & SMITH, 1900 NICE LOOKING GREEN COVER, SOLDIER ON FRONT WITH GUN, ORANGE AND BLACK DESIGN, GOLD PRINT SPINE. FRONT LOWER RIGHT CORNER SLIGHTLY BUMPED. FORMER OWNERS LABEL IN FRONT, JC PENNEY STICKER FRONT. NO OTHER MARKINGS, TIGHT AND GOOD SHAPE. RARE BOOK. The Siege of Cawnpore was a key episode in the Indian rebellion of 1857. The besieged British in Cawnpore (now Kanpur) were unprepared for an extended siege and surrendered to rebel Indian forces under Nana Sahib, in return for a safe passage to Allahabad. However, under ambiguous circumstances, their evacuation from Cawnpore turned into a massacre, and most of them were killed. WILLIAM MURRAY GRAYDON- (1864–1946) published fourteen books for boys from 1897, including The Fighting Lads of Devon, or, In the Days of the Armada (1900), The Jungle Trappers: A Tale of the Indian Jungle (1905), Lost in the Slave Land, or, The Mystery of the Sacred Lamp Rock (1902), On Winding Waters: A Tale of Adventure and Peril (1902), With Cossack and Convict: A Realistic Story (1903), and With Musketeer and Redskin: A Tale of New Plymouth (1904). ANTIQUE BOOKS DEN, WHERE HISTORY LIVES.

Tracking number provided with all domestic shipments. If books are large, of excessive weight or need to ship internationally additional shipping charges may need to be approved before shipment. 10 day return guarantee, with full refund for up to 10 days after delivery if an item arrives incorrectly described or damaged. Guaranteed satisfaction.

Seller rating:
This seller has earned a 5 of 5 Stars rating from Biblio customers.
Biblio.com member since: 2013
Pittsburgh, Pennsylvania
Ask Seller a Question

Used, rare and out of print books. FIVE STAR RATING. Well kept, quality inventory that is updated weekly. The Antique Books Den prides itself on operating an honest establishment and guarantees customer satisfaction. Our goal is to keep our customers coming back again and again. We care. Tracking number is provided on all domestic shipments. Fast/ protected shipment. Please contact with any questions. antiquebooksden@gmail.comANTIQUE AND COLLECTIBLE BOOKS should be well taken care of so that the value and enjoyment increase with age. There is nothing like holding and reading a book that was published over 100 years ago.ANTIQUE BOOKS DEN, WHERE INTERESTING BOOKS LIVE. Honest small business, growing weekly. Earning your loyalty.

tight
Used to mean that the binding of a book has not been overly loosened by frequent use.
spine
The outer portion of a book which covers the actual binding. The spine usually faces outward when a book is placed on a shelf....[more]