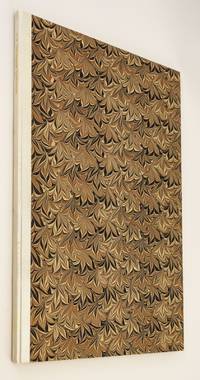 Harper Woods, Michigan: [Printed by Leonard F. Bahr at] The Adagio Press, 1969. COPY "G" OF 12 COPIES WITH TWO ORIGINAL LEAVES PRINTED ON VELLUM (and, of these, one of 10 with a gilt initial) from a total edition of 329 copies. SIGNED BY THE PRINTER. 390 x 255 mm. (15 1/2 x 10"). 49, [1] pp., [3] leaves (last blank). Publisher's vellum-backed marbled paper boards, gilt titling on spine. In the original tan linen slipcase. Prospectus, mounted photo of Emery Walker and Cobden-Sanderson, and sample leaf laid in at front, along with a typed letter, signed, from author Norman Strouse to collector Duncan Andrews, listing the dealers offering the special copies with two vellum leaves. Front pastedown with bookplate of Haven O'More of The Garden Ltd. Text printed in brown, blue, and black. Tidcombe, pp. ix, 144, 154; Cave, p. 264. In mint condition. This handsomely printed book is a study of Thomas James Cobden-Sanderson (1840-1922), founder of the Doves Press and the foremost figure in the late 19th and early 20th century among those who straddled the fields of English fine press publishing and artistic binding. The first section, by Norman H. Strouse, gives an overview of the life, character, and aims of Cobden-Sanderson. The second section, by John Dreyfus, studies the troubled relationship of Cobden-Sanderson with his original partner in the press, Emery Walker, based on the discovery of new documents. Our copy of this study includes two leaves from Doves Press books, one from Goethe's "Iphigenie auf Tauris" and the other from the English Bible, the former with a fine burnished gold manuscript initial by Edward Johnston. The published copies are divided among 242 regular copies with two leaves on paper, 75 copies with a Bible leaf on paper and a different leaf on vellum, and the other 12 with two vellum leaves (10 of those with the gold Johnston initial). While copies with one or two leaves on paper are readily available, those copies like the present example--with two gilt-decorated vellum leaves--are very hard to come by. Cave calls our work an "important study" and "the most substantial" product of the Adagio Press, which was founded in 1956 in Grosse Pointe Park, Michigan, by Leonard F. Bahr and later moved to Harper Woods, Michigan. American bibliophile Duncan Andrews (1935-2011) assembled an important collection with concentrations in foxhunting books, the manuscripts and books of English poet Sir John Betjeman, and the work of engraver Stephen Gooden; he produced a catalogue raisonné and bibliography of the latter. Our copy was also part of the Garden Collection, assembled by Haven O'More with funding from Michael Davis, which was the most outstanding library of notable books put together in America in the second half of the 20th century. When it was auctioned by Sotheby's in 1989, the sale brought in $16.2 million. The library included high spots from all periods (the four Shakespeare folios, the first edition of "Don Quixote," and Blake's "Songs of Innocence and Experience" brought in more than $5 million alone), and the collection was breathtaking in its impeccable condition.

fine
A book in fine condition exhibits no flaws. A fine condition book closely approaches As New condition, but may lack the...[more]
marbled paper
Decorative colored paper that imitates marble with a veined, mottled, or swirling pattern. Commonly used as the end papers or...[more]
spine
The outer portion of a book which covers the actual binding. The spine usually faces outward when a book is placed on a shelf....[more]
bookplate
Highly sought after by some collectors, a book plate is an inscribed or decorative device that identifies the owner, or former...[more]
First Edition
In book collecting, the first edition is the earliest published form of a book. A book may have more than one first edition in...[more]
vellum
Vellum is a sheet of specialty prepared skin of lamb, calf, or goat kid used for binding a book or for printing and writing. ...[more]
leaves
Very generally, "leaves" refers to the pages of a book, as in the common phrase, "loose-leaf pages." A leaf is a single sheet...[more]
New
A new book is a book previously not circulated to a buyer. Although a new book is typically free of any faults or defects,...[more]
gilt
The decorative application of gold or gold coloring to a portion of a book on the spine, edges of the text block, or an inlay in...[more]