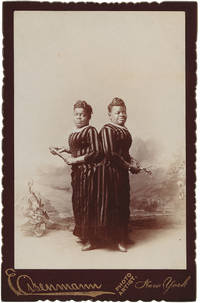 Signed cabinet card portrait of the famous conjoined twins Millie and Christine McCoy (1851-1912), by the great photographer of human marvels on the Bowery, Charles Eisenmann. The twins, often referred to collectively as “Millie-Christine” or “The Two-Headed Nightingale,” were among the most widely viewed, scrutinized, and applauded human anomalies of the 19th century. Billing them often as the “Eighth Wonder of the World,” promoters touted the fact that the girls were joined at the lower spine, more intimately attached than Chang and Eng, the original Siamese Twins. Audiences drawn to see the twins’ remarkable anatomy found themselves marveling likewise at their musical performances, radiant personalities, and moving personal story.Millie and Christine were born into slavery in Columbus County, North Carolina in 1851 and immediately became a spectacle among curious residents of the surrounding region. By the age of ten months they were sold to a showman for the sum of $1000, and over the next five years they passed through the hands of both bidders and kidnappers, who exhibited them privately to prodding physicians at publicly at dime museums and county fairs.At the age of two, they disappeared in New Orleans, and their legal title was transferred to Joseph Pearson Smith, the guarantor of the manager who had lost them. Smith engaged the services of a private investigator, who discovered the twins in England, and in 1857 Smith and Millie and Christine’s mother, Monemia McCoy, traveled across the Atlantic and staged a dramatic rescue at the Birmingham theater where the girls were then performing. Upon their return to the U.S., Millie and Christine moved to the homestead of the Smith family in Wadesboro, North Carolina, where both of their parents and all of their siblings had also been transferred after purchase by the Smiths from their original slaveholders. Mrs. Smith taught the girls how to sing and dance and, against state law, how to read and write. In short time, the sisters developed famous acts that featured keyboard duets and vocal harmonies, with Millie singing alto and Christine soprano.Mr. Smith served as their manager, a role that his son, Joseph Pearson Smith, Jr., would assume upon the death of the former in 1862. While it was the Emancipation Proclamation and end of the Civil War – not the Smiths, themselves – that freed the McCoys, Joseph Jr. remained Millie and Christine’s manager for most of their career, and the two families, by all accounts, maintained a genuinely warm relationship. As the girls progressed through adolescence, they successfully took increasingly greater control of both their career and their collective body, refusing further anatomical inspections from curious doctors and scientists they felt would violate their privacy. As their stage shifted from theaters and salons to the circuses of the 1870s and 1880s, the sisters remained wildly popular and successful. They settled into retirement back in Columbus County, where they had long cared for family, friends, and neighbors, built a Methodist church and a school for African American children, and quietly and generously supported several black educational institutions across North Carolina. An exceptionally crisp and attractive example of this photograph.

gilt
The decorative application of gold or gold coloring to a portion of a book on the spine, edges of the text block, or an inlay in...[more]
crisp
A term often used to indicate a book's new-like condition. Indicates that the hinges are not loosened. A book described as crisp...[more]
verso
The page bound on the left side of a book, opposite to the recto page.
edges
The collective of the top, fore and bottom edges of the text block of the book, being that part of the edges of the pages of a...[more]
First Edition
In book collecting, the first edition is the earliest published form of a book. A book may have more than one first edition in...[more]
fine
A book in fine condition exhibits no flaws. A fine condition book closely approaches As New condition, but may lack the...[more]
spine
The outer portion of a book which covers the actual binding. The spine usually faces outward when a book is placed on a shelf....[more]
recto
The page on the right side of a book, with the term Verso used to describe the page on the left side.