Home Paul Haynes Rare Books The Cabinet. By a Society of Gentlemen 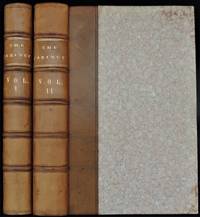 The Cabinet. By a Society of Gentlemen

The Cabinet. By a Society of Gentlemen

by A Society of Gentlemen

The Preface reads: "No work in the English language, perhaps, ever appeared to the world under circumstances more inauspicious and depressing than the Cabinet... the giant arm of a ferocious and unrelenting despotism threatened destruction to the defenders of liberty and truth". 1794 The British Treason Trials/French Revolution. The Cabinet was published by J S Jordan, Thomas Paine's publisher, (subsequently tried and imprisoned). It published articles taking an anti government stance. On January 31, Thomas Paine gave the manuscript of The Rights of Man to publisher Joseph Johnson. A visit by government agents dissuaded Johnson, so Paine gave the book to publisher J.S. Jordan, then went to Paris, on William Blake's advice. He charged three good friends, William Godwin, Thomas Brand Hollis, and Thomas Holcroft, with handling publication details. The Rights of Man continues to face challenges today for its "subversive" and "radical" ideas, and remains one of history's most banned political narratives.

Penelope Corfield and Walter Graham have identified a number of the contributors:

Amelia Opie, née Alderson ("N") (12 November 1769 – 2 December 1853), "Miss Alderson had inherited radical principles and was an ardent admirer of John Horne Tooke. She was close to activists John Philip Kemble, Sarah Siddons, William Godwin and Mary Wollstonecraft. Amelia Alderson contributed fifteen poems to the first three issues of The Cabinet. Increasing revolutionary violence and warfare polarized public opinion, however, and a large show trial of leading 'English Jacobins', including the Aldersons' acquaintances Thomas Holcroft and John Horne Tooke, was scheduled for November 1794. A month earlier Amelia Alderson had told Susannah Taylor that she was pessimistic at the outcome, that The Cabinet was considered a 'dangerous' publication."

Equiano, Olaudah (OTHELLO) [Gustavus Vassa] (c.1745–1797), "author and slavery abolitionist. Equiano, the African by Vincent Carretta. "Equiano's association with the members of the Tusculan School may have continued beyond his stay in Norwich. The school debates evolved into the Cabinet. The author of the anti-war essay entitled "Mischievous Effects of War" used the pseudonym "Othello", which suggests that the writer was of African descent. Equiano may have been "Othello". Of the twenty known contributors to the Cabinet, all publishing pseudonymously, thirteen subscribed to Equiano's Norwich edition."

William Youngman (Alcanor) d. 1836. "A wine merchant and member of the Independent Congregation at Norwich."

John Pitchford (Y) (1772-1839) "educated at Norwich under Samuel Parr and at St. Omer, he was a chemist and political radical in Norwich."

calf
Calf or calf hide is a common form of leather binding.  Calf binding is naturally a light brown but there are ways to treat...[more]
gilt
The decorative application of gold or gold coloring to a portion of a book on the spine, edges of the text block, or an inlay in...[more]
Marbled boards
...[more]
title page
A page at the front of a book which may contain the title of the book, any subtitles, the authors, contributors, editors, the...[more]