Home ThriftBooks The Call of the Wild 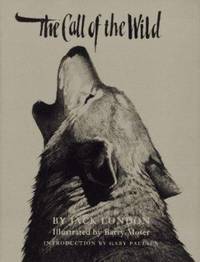 Simon & Schuster Children's Publishing, 1994. Hardcover. Good. Disclaimer:A copy that has been read, but remains in clean condition. All pages are intact, and the cover is intact. The spine may show signs of wear. Pages can include limited notes and highlighting, and the copy can include previous owner inscriptions. An ex-library book and may have standard library stamps and/or stickers. At ThriftBooks, our motto is: Read More, Spend Less.Dust jacket quality is not guaranteed.

Jack London’s The Call of the Wild is an anthropomorphic canine’s unforgettable tale of survival. Set during the 1890s Klondike Gold Rush, the novel’s main character, Buck, a large and powerful St. Bernard-Scotch Shepherd, is stolen from his ranch home in Santa Clara Valley, California, and sold into service as a sled dog. At first, Buck experiences violence and struggles for survival, becoming progressively feral in the harsh environment. By the end, Buck relies on his instinct and learned experience to emerge as the proven leader of the pack.  In The Call of the Wild, author Jack London blends his experience as a gold prospector in the Canadian wilderness with his ideas about nature and the struggle for existence, influenced by the work of Darwin and Nietzsche. Thus, although the novel is first and foremost a story about a dog, it displays a philosophical depth absent in most animal adventures. In the summer of 1903, the story was first serialized in four installments in The Saturday Evening Post, which paid $750 for it. Soon after, London sold all rights to The Call of the Wild to Macmillan, which published the story in book format in August of that same year. As the first printing of 10,000 copies sold out immediately, it is safe to say the novel was enormously popular from the moment it was published. It has since secured its place in the canon of American literature. Today, The Call of the Wild is still one of the best-known stories written by an American author and has been published in almost 50 languages. The Call of the Wild is ranked 35th on The Guardian’s list of the 100 best novels and 88th on Modern Library’s “100 Best” English-language novels of the 20th century.

Read more: Identifying first editions of The Call of the Wild