Home Books in Bulgaria The Call of the Wild 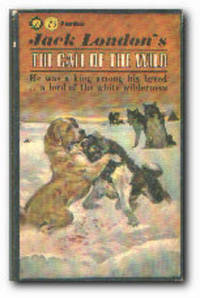 London: Panther. Very Good. 1963. Reprint. Paperback. He was a king among his breed, a lord of the white wilderness. This is the famous story of Buck, the sledge dog that joins a wolf pack after the murder of his master by Indians. .

Jack London’s The Call of the Wild is an anthropomorphic canine’s unforgettable tale of survival. Set during the 1890s Klondike Gold Rush, the novel’s main character, Buck, a large and powerful St. Bernard-Scotch Shepherd, is stolen from his ranch home in Santa Clara Valley, California, and sold into service as a sled dog. At first, Buck experiences violence and struggles for survival, becoming progressively feral in the harsh environment. By the end, Buck relies on his instinct and learned experience to emerge as the proven leader of the pack.  In The Call of the Wild, author Jack London blends his experience as a gold prospector in the Canadian wilderness with his ideas about nature and the struggle for existence, influenced by the work of Darwin and Nietzsche. Thus, although the novel is first and foremost a story about a dog, it displays a philosophical depth absent in most animal adventures. In the summer of 1903, the story was first serialized in four installments in The Saturday Evening Post, which paid $750 for it. Soon after, London sold all rights to The Call of the Wild to Macmillan, which published the story in book format in August of that same year. As the first printing of 10,000 copies sold out immediately, it is safe to say the novel was enormously popular from the moment it was published. It has since secured its place in the canon of American literature. Today, The Call of the Wild is still one of the best-known stories written by an American author and has been published in almost 50 languages. The Call of the Wild is ranked 35th on The Guardian’s list of the 100 best novels and 88th on Modern Library’s “100 Best” English-language novels of the 20th century.

Read more: Identifying first editions of The Call of the Wild

We endeavour to describe our books accurately, but if you are dissatisfied in any way on receipt of order or wish to cancel the contract for any reason within seven days. The period to start the day after the date on which the goods are received, in which case please contact us to arrange the return and refund of the cost of the goods and delivery. This does not affect your statutory rights. All returned goods should be packed to the same standard as sent. Unless we advise or you request otherwise, books are sent next working day, (often same day)by the method you selected on the check out page. This page also gives the shipping costs, if you have any queries or requirements about shipping please contact us before ordering. On occasion, very heavy books may require an additional shipping amount, if so we will contact you to agree this before the sale is processed.

Seller rating:
This seller has earned a 5 of 5 Stars rating from Biblio customers.
Biblio.com member since: 2003
Blagoevgrad Region
Ask Seller a Question

About Books in Bulgaria

The largest English Language second hand bookshop in the Balkans.