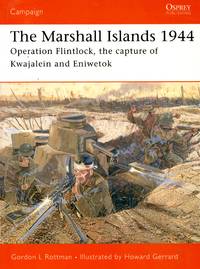 Campaign No.146: The Marshall Islands 1944 - Operation Flinklock, the Capture of Kwajalein and Eniwetok

Campaign No.146: The Marshall Islands 1944 - Operation Flinklock, the Capture of Kwajalein and Eniwetok

Botley, Oxford, UK: Osprey Publishing, 2004. 96 Pages with Black/White Photos and Colour Plates. Following the capture of Tarawa in November 1943, American eyes turned to the Marshall Islands. These were the next vital stepping-stone across the Pacific towards Japan, and would bring the islands of Guam and Saipan within the reach of US forces. In their first amphibious attack, the new 4th Marine Division landed on Roi and Namur islands on 1 February 1944, while US 7th Division landed on Kwajalein. At the time this was the longest shore-to-shore amphibious assault in history. The lessons of the bloody fighting on Tarawa had been well learned and the successful attack on the Marshalls set the pattern for future amphibious operations in the Pacific War. . First Edition. Soft Cover. Very Good/No Jacket.

jacket
Sometimes used as another term for dust jacket, a protective and often decorative wrapper, usually made of paper which wraps...[more]
First Edition
In book collecting, the first edition is the earliest published form of a book. A book may have more than one first edition in...[more]
New
A new book is a book previously not circulated to a buyer. Although a new book is typically free of any faults or defects,...[more]