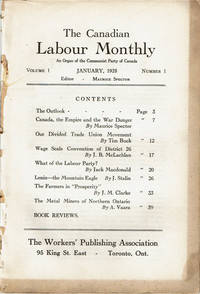 THE CANADIAN LABOUR MONTHLY. An Organ of the Communist Party of Canada. Volume 1, Number 1, January, 1928.

THE CANADIAN LABOUR MONTHLY. An Organ of the Communist Party of Canada. Volume 1, Number 1, January, 1928.

Toronto, Ontario: The Workers' Publishing Association, 1928., 1928.. Good. - Octavo, 9-1/2 inches high by 6-1/2 inches wide. Printed self-wraps. This periodical was once bound in with a larger collection of pamphlets as attested by remnants of paper along the spine and stab marks along the inner edge. The front and lower edges of the front cover are darkened and there is a small chip to the bottom of the rear cover. 48 pages, including the front cover. Good.

This periodical includes the following essays & articles: "Canada, the Empire and the War Danger" by Maurice Spector, "Our Divided Trade Union Movement" by Tim Buck, "What of the Labour Party" by Jack Macdonald, "The Farmers in 'Prosperity'" by J.M. Clarke, and "The Metal Miners of Northern Ontario" by A. Vaara.

The editor and author of one of the articles, Maurice Spector (1898-1968) was Chairman of the Communist Party of Canada. He also edited the party's newspaper "The Worker" through most of the 1920's. Spector was an early follower of Leon Trotsky after his split from the Communist International.

One of the leaders of the Stalin-era Communist International, Tim Buck (1891-1973) was general secretary of the Communist Party of Canada from 1929 to 1962.

The coal miner, union leader, and farmer James Bryson McLachlan (1869-1937) was also a journalist and contributed an article on the "Wage Scale Convention of District 26".

Scottish-born Jack MacDonald (b. 1888) was a member of the British Socialist Party and of the Scottish Social Democratic Federation. Immigrating to Toronto, he was a founding member of the Communist Party of Canada. Ironically, MacDonald supported the expulsion of Maurice Spector for Trotskyism in 1928 and was subsequently expelled himself after being accused of being a Lovestoneite (a supporter of Bukharin's Right Opposition). He reconciled with Spector and, in 1932, joined the Toronto branch of the International Left Opposition (Trotskyist) Canada.

J.M. Clarke was editor of "The Furrow", the Communist Party's farmer's magazine.

Aaro Vaara was arrested for sedition in 1927 after writing dismissively about the Royal Family in a Finnish-language newspaper published in Sudbury, Ontario. At the time, Sudbury was the center of nickel mining and smelting and is said to have resembled nothing less than Dante's Inferno. Mostly French Canadians and immigrant labor (particularly from Finland) worked the mines and few spoke English.

Payment with order from individuals. Items are offered subject to prior sale. All purchases are subject to your approval, returnable within 10 days. New York State residents please add sales tax to your purchases. All items are guaranteed authentic and as described.

Seller rating:
This seller has earned a 5 of 5 Stars rating from Biblio customers.
Biblio.com member since: 2003
Cadyville, New York
Ask Seller a Question

Blue Mountain Books & Manuscripts, Ltd. (incorporated 1989) is a general antiquarian book store which buys and sells collections and individual items of significance. Booksellers Ric Zank and Daniel Meunier each bring to the business over 18 years of experience in seeking out and offering for sale unusual, uncommon and rare books, autographs, and ephemera in all fields. Our office is open 7 days a week from 10 a.m. to 6 p.m. and frequently later. An answering machine will take your message after hours and when we are out of the office.

octavo
Another of the terms referring to page or book size, octavo refers to a standard printer's sheet folded four times, producing...[more]
edges
The collective of the top, fore and bottom edges of the text block of the book, being that part of the edges of the pages of a...[more]
spine
The outer portion of a book which covers the actual binding. The spine usually faces outward when a book is placed on a shelf....[more]