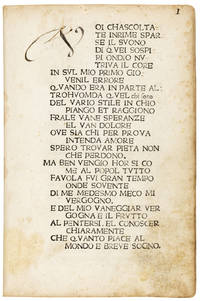 [Sant'Orso]: Leonardus Achates de Basilea, 1474. Second edition of this version; the seventh edition in total.
Petrarch's poetry in Italian, the Canzoniere and the Trionfi count among the most celebrated and influential works in western literature. In the present incunable edition it is combined with the brief biography by Leonardo Bruni that helped to spread the poet's fame and reputation.

Petrarch's 'Book of Songs', based on the 'libro d'autore'


Petrarch (Francesco Petrarca, 1304-1374) is considered one of the greatest love poets of world literature. Referred to by Petrarch himself as Rerum vulgarium fragmenta, and in his opening words called "rime sparse" (scattered rhymes), the collection of 366 poems - mostly sonnets - was called Il Canzoniere (Book of Songs) since the Renaissance. Immortalising the poet's love for the unattainable Laura, this cycle established the sonnet form and became the basis for the development of lyric poetry throughout Renaissance Europe.

Petrarch composed, selected and reordered the Canzoniere over a period of four decades, beginning shortly after 1327 until his very last years. Around 1366, he began a new manuscript intended as a fair copy of this work. He completed the manuscript until 1374, first with the assistance of a scribe, then in his own hand. This final copy (now in the Vatican Library, Vat. Lat. 3195) is regarded as the deliberately designed libro d'autore, representing Petrarch's original concept of his book as a whole: structure and arrangement of the text, mise en page, notation etc. This definitive personal manuscript was the basis and model of the edition printed in 1472 by Bartolomeo da Valdezocco in Padua. It is thus the first edition thoroughly reflecting Petrarch's intentions, a landmark and the most important of the 15th-century editions in terms of the philology of the text. The present edition is a reprint of this edition.

The manuscript Vat. Lat. 3195 was used again, not before 1501, by Pietro Bembo for the fundamental Aldine Petrarch edition that canonized Petrarch as one of the classics of modern Italian literature. The present edition of 1474 is thus one of the very few and very rare earlier examples that closely represent Petrarch's vernacular poetry testimonies in print.

The present edition is extremely rare, even rarer than its model edition of 1472: only 20 copies listed in ISTC and GW.

First Edition
In book collecting, the first edition is the earliest published form of a book. A book may have more than one first edition in... [More]
leaves
Very generally, "leaves" refers to the pages of a book, as in the common phrase, "loose-leaf pages." A leaf is a single sheet... [More]
Fair
is a worn book that has complete text pages (including those with maps or plates) but may lack endpapers, half-title, etc.... [More]
morocco
Morocco is a style of leather book binding that is usually made with goatskin, as it is durable and easy to dye. (see also... [More]
New
A new book is a book previously not circulated to a buyer. Although a new book is typically free of any faults or defects, "new"... [More]
reprint
Any printing of a book which follows the original edition. By definition, a reprint is not a first edition.
vellum
Vellum is a sheet of specialty prepared skin of lamb, calf, or goat kid used for binding a book or for printing and writing. ... [More]
gutter
The inside margin of a book, connecting the pages to the joints near the binding.