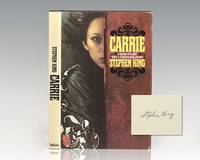 New York: Doubleday, 1974. First edition stated on copyright page and "P6" in the gutter of page 199 of King's first book. Octavo, original cloth. Signed by Stephen King in a contemporary hand. Fine in a near fine dust jacket with a touch of shelfwear. Jacket design by Alex Gotfryd. A nice example. Stephen King has been read by more people than any living author, and more than most dead ones. As Don Heron commented in "The Penguin Encyclopedia of Horror and the Supernatural," King specializes in "contemporary American scenes, everyday parents and kids and teenagers, vulgarly realistic language - a believable setting awaiting the coming of terror." He has become the most popular horror writer of all time. Several adaptations of Carrie have been released, including a 1976 feature film, a 1988 Broadway musical, a 1999 feature film sequel, a 2002 television movie, and a 2013 feature film remake.

First published in 1974, Carrie was Stephen King's first published novel.  This dark tale introduces the reader to Carrie White, a social outcast in her highschool, menaced by bullies while at school, and her religious nut of a mother at home.  Carrie gradually discovers that she has telekinetic powers, and woe to her tormentors...

Seller rating:
This seller has earned a 5 of 5 Stars rating from Biblio customers.
Biblio.com member since:
Palm Beach, Florida
Ask Seller a Question

fine
A book in fine condition exhibits no flaws. A fine condition book closely approaches As New condition, but may lack the...[more]
jacket
Sometimes used as another term for dust jacket, a protective and often decorative wrapper, usually made of paper which wraps...[more]
octavo
Another of the terms referring to page or book size, octavo refers to a standard printer's sheet folded four times, producing...[more]
First Edition
In book collecting, the first edition is the earliest published form of a book. A book may have more than one first edition in...[more]
Copyright page
The page in a book that describes the lineage of that book, typically including the book's author, publisher, date of...[more]
shelfwear
Minor wear resulting from a book being place on, and taken from a bookshelf, especially along the bottom edge.
gutter
The inside margin of a book, connecting the pages to the joints near the binding.
Cloth
"Cloth-bound" generally refers to a hardcover book with cloth covering the outside of the book covers. The cloth is stretched...[more]

Home > Raptis Rare Books > Carrie.
Yes, we have a new look!
Let us know what you think.