Home rare books Law More Rare Books from The Lawbook Exchange Ltd The Case of Authors by Profession or Trade, Stated [Bound with].. 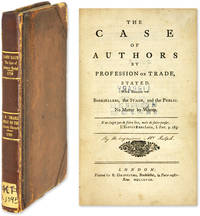 The Case of Authors by Profession or Trade, Stated [Bound with]..

The Case of Authors by Profession or Trade, Stated [Bound with]..

1758. An Essay on the Manners and Genius of the Literary. An Essay on the Manners and Genius of the Literary. Indirect Influences on the Development of Copyright Law [Ralph, James (d. 1762)]. The Case of Authors by Profession or Trade, Stated. With Regard to Booksellers, The Stage, And the Public. No Matter by Whom. London: Printed for R. Griffiths, 1758. [iv], 68 [i.e.76] pp. [Bound with] D'Israeli, Isaac [1766-1848]. An Essay on the Manners and Genius of the Literary Character. London: Printed for T. Cadell, 1795. xxiii, [1], 226 pp. Octavo (7-3/4" x 4-3/4"). Contemporary calf, gilt rules to boards, rebacked and recornered, gilt titles to spine, marbled edges. Moderate rubbing to extremities, minor gatoring to boards, hinges starting, later owner bookplate of George P. Philes to front pastedown, pocket, with nine leaves of bibliographical and critical notes by Philes, to rear pastedown. A few cracks to text block, moderate toning to text, light foxing in places, annotations and check marks in Philes's hand to some leaves, other owner signatures (J. Mitford and Chas. Wright, dated November 1853) to front endleaf, "By the ingenious Mr. Ralph" in early hand to title page of The Case. Ex-library. Shelf label to spine, small inkstamp to verso of title page of The Case. Two scarce titles with an interesting association. $1,500. * First editions. Born in New Jersey, Ralph was a versatile writer of literary works, histories and political criticism. He began his career in Philadelphia, where he associated with Benjamin Franklin. He traveled with Franklin to London in 1725 and remained there for the rest of his life. An author of some stature, he worked closely with Henry Fielding and was one of the writers satirized in Pope's Dunciad. The Case of Authors is one of his most important and enduring works. It argues that the decline of aristocratic patronage has placed the writer at the mercy of the marketplace, with negative financial, artistic and intellectual consequences. Although it sold poorly, it went on to influence literary criticism and the development of copyright law. It was reissued in 1762. Cited in works by Oliver Goldsmith and Thomas Babington Macaulay, it also influenced the Essay on the Manners and Genius of the Literary Character. It was a popular book that reached its fourth edition in 1828. Its author, the father of the Prime Minister, was a notable literary scholar and essayi.

bookplate
Highly sought after by some collectors, a book plate is an inscribed or decorative device that identifies the owner, or former... [More]
calf
Calf or calf hide is a common form of leather binding.  Calf binding is naturally a light brown but there are ways to treat... [More]
rebacked
having had the material covering the spine replaced. ... [More]
verso
The page bound on the left side of a book, opposite to the recto page.
edges
The collective of the top, fore and bottom edges of the text block of the book, being that part of the edges of the pages of a... [More]
rubbing
Abrasion or wear to the surface. Usually used in reference to a book's boards or dust-jacket.
gilt
The decorative application of gold or gold coloring to a portion of a book on the spine, edges of the text block, or an inlay in... [More]
New
A new book is a book previously not circulated to a buyer. Although a new book is typically free of any faults or defects,... [More]
leaves
Very generally, "leaves" refers to the pages of a book, as in the common phrase, "loose-leaf pages." A leaf is a single sheet... [More]
spine
The outer portion of a book which covers the actual binding. The spine usually faces outward when a book is placed on a shelf.... [More]
text block
Most simply the inside pages of a book.  More precisely, the block of paper formed by the cut and stacked pages of a... [More]
octavo
Another of the terms referring to page or book size, octavo refers to a standard printer's sheet folded four times, producing... [More]
title page
A page at the front of a book which may contain the title of the book, any subtitles, the authors, contributors, editors, the... [More]