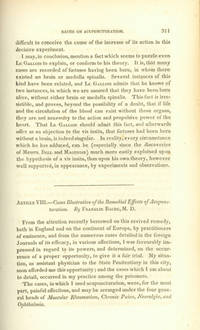 Cases illustrative of the remedial effects of acupuncturation

Cases illustrative of the remedial effects of acupuncturation

Philadelphia, 1826. One of the First American Scientific Efforts to Alleviate Pain: the First American Study of Acupuncture, Together with First English Translation of Ten Rhyne's "De acupunctura" (1) Bache, Franklin (1792-1864). Cases illustrative of the remedial effects of acupuncturation. In North American Medical and Surgical Journal 1 (1826): 311-321. (2) [Ten Rhyne, Wilhelm (1648-1700).] Wilhelmi Ten Rhyne M.D. Transisalano. Daventriensis, Dissertatio de arthritide: Mantissa schematica: De acupunctura, et orationes tres . . . In ibid.: 198-204. (3) Hewson, Thomas. Case of ecthyma cachecticum, with observations. In ibid.: 89-94; 2 hand-colored plates. Whole volume, 8vo. viii, [2], 495, [3, incl. adverts.]pp. 3 plates. 212 x 133 mm. 19th century half calf, marbled boards, leather spine label. Minor foxing and toning, but very good. From the Svenska Läkaresällskapets Bibliotek, with the library's 19th century stamp on the title and front cover and library label inside front cover. (1) First Edition of the first original study of acupuncture published in North America, and one of the earliest American publications on the alleviation of pain. Franklin Bache, great-grandson of Benjamin Franklin, was the first American to perform original research on acupuncture. In 1825 Bache had issued his translation of J. Morand's Mémoire sur l'acupuncture (1825) under the title Memoir on Acupuncturation; this was the first book on acupuncture to be published in America (see Garrison-Morton 6374.15). The same year, Bache conducted his own experimental study of acupuncture, which he recorded in the present paper. "As assistant physician at the state penitentiary in Philadelphia, Bache determined in 1825 to test acupuncture on the prisoners whom he was called upon to serve. With the aid of a colleague, he used the needles to treat 12 different prisoners who were suffering from highly painful afflictions: three with muscular rheumatism, four with 'chronic pains,' three with neuralgia, and two with ophthalmia. He also used acupuncture among the prisoners in relieving several lesser pains, including a headache accompanying bilious fever, the head pain of an epileptic, an elastic tumor near the elbow joint, and a dull pain caused by pulmonic inflammation. "Bache reported varying successes. In summarizing 17 subsequent cases, some of which were not among the prisoners, he noted that seven "were completely cured, seven considerably relieved, and in the remaining three cases, the remedy produced no effect." "Over all, Bache was convinced that the measure offered great promise for "removing and mitigating pain." He concluded that it could well be 'a proper remedy in almost all diseases, whose prominent symptom is pain'" (Cassedy, pp. 894-895). Bache was one of the very few American physicians in the early nineteenth century to adopt acupuncture as a method of pain relief, despite the fact that the practice was enjoying a considerable vogue in Europe at the time. This volume of the North American Medical and Surgical Journal includes several brief abstracts from European journals on the uses of acupuncture; see pp. 225-227 and 448-449. (2) First English Translation of Ten Rhyne's aphorisms on acupuncture, originally included in his Dissertatio de arthritide (1683; see Garrison-Morton 6374.10). Ten Rhyne's "De acupuntura" represents the first detailed description of acupuncture published in the West. The anonymous translators added a brief historical introduction and a copy of Ten Rhyne's illustration of an acupuncture needle and hammer. (3) Hewson's article on ecthyma (a skin infection similar to impetigo) is remarkable for its hand-colored plates, which are among the earliest to appear in an American medical periodical. Volume 1 of the North American Medical and Surgical Journal is very rare on the market. This is the first copy we have handled in 40 years of trading. Nor have we ever heard of an offprint of Bache's paper. Cassedy, "Early uses of acupuncture in the United States, with an addendum (1826) by Franklin Bache, M.D.," Bulletin of the New York Academy of Medicine 50 (1974): 892-906. "Wilhelm Ten Rhyne's De acupunctura: An 1826 translation," Journal of the History of Medicine and Allied Sciences 34 (1979): 81-92. Lu & Needham, Celestial Lancets, p. 299. 40833.

Seller rating:
This seller has earned a 5 of 5 Stars rating from Biblio customers.
Biblio.com member since: 2009
Novato, California
Ask Seller a Question

We are open during normal business hours Monday through Friday, by appointment only.

offprint
A copy of an article or reference material that once appeared in a larger publication.
Marbled boards
...[more]
First Edition
In book collecting, the first edition is the earliest published form of a book. A book may have more than one first edition in...[more]
spine label
The paper or leather descriptive tag attached to the spine of the book, most commonly providing the title and author of the...[more]
New
A new book is a book previously not circulated to a buyer. Although a new book is typically free of any faults or defects,...[more]
calf
Calf or calf hide is a common form of leather binding.  Calf binding is naturally a light brown but there are ways to treat...[more]