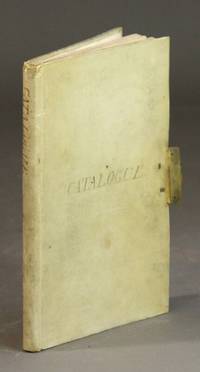 n.p. [likely New England], 1832. Small 8vo, [64]pp. of which 16 are filled in, and list better than 375 titles; 4 early leaves have been excised, but the catalogue begins anew with a title-p., as above; contemporary vellum with metal clasp, the word "Catalogue" in ink on upper cover and spine. An American book catalogue listing 164 titles under the heading "Theology," 17 titles under "Classics," 28 titles under "Works of Science," 35 titles under "History & Biography," 91 titles under "General Literature," and 42 titles under "Miscellaneous." A few of the titles have lines drawn through them, as if they had gone missing or were dispersed; most entries in ink, a few later ones in pencil; all titles given in abbreviated form, with no dates, but with the number of volumes, such as Cruden's Concordance (1), or Novum Testamentum Koppianum (2), or Plutarch's Lives (8), or Gilles' Greece (4), or just The Panoplist, or Oliver Twist. Nonetheless, an interesting insight into an American private library, or possibly a circulating library. A penciled note on the title-p. references "B. C. Brooks (?)."

New
A new book is a book previously not circulated to a buyer. Although a new book is typically free of any faults or defects,... [More]
leaves
Very generally, "leaves" refers to the pages of a book, as in the common phrase, "loose-leaf pages." A leaf is a single sheet... [More]
spine
The outer portion of a book which covers the actual binding. The spine usually faces outward when a book is placed on a shelf.... [More]
vellum
Vellum is a sheet of specialty prepared skin of lamb, calf, or goat kid used for binding a book or for printing and writing. ... [More]