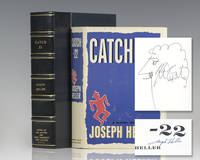 New York: Simon & Schuster, 1961. First edition of one of the most significant novels of the twentieth century. Octavo, original blue cloth. Boldly signed by Joseph Heller on the title page. Additionally signed by author Kurt Vonnegut on the front free endpaper, who has added a self-caricature. Like Catch-22, by Vonnegut's friend, Joseph Heller, Slaughterhouse-Five was a World War II novel embraced by opponents of the Vietnam War, linking a so-called "good war" to the unpopular conflict of the 1960s and '70s. In 2005, six years after Heller's death, Vonnegut published a short poem in The New Yorker with the title 'Joe Heller.' The poem recalled a conversation Vonnegut and Heller shared at a party hosted by a billionaire on Shelter Island. In a few verses, Vonnegut expresses his admiration for the late Heller and his friend's philosophy about the meaning of life. The two agree that gaining knowledge has been more substantive than gaining wealth throughout both of their lives. Fine in a near fine dust jacket with light rubbing. Jacket design by Paul Bacon. Housed in a custom half morocco clamshell box. A unique example. "Catch-22, Joseph Heller's first and best-known novel, depicts a military world turned upside down. In Heller's World War II, a supplies manager has more power than a general, and anyone seeking a discharge on the grounds of insanity is declared sane enough to keep on fighting. When the novel appeared in 1961, World War II veterans appreciated its satire of the military bureaucracy and chaos of war. By the mid-1960's, it had become a cult classic among counterculture activists for its biting indictments of war. Many consider the novel to be the definitive statement of the modern antiwar position. The phrase 'Catch-22', symbolizing the absurdity of all institutional logic, has become a permanent part of our language" (NYPL Books of the Century 177). Basis for the 1970 film directed by Mike Nichols. The cast included Alan Arkin, Bob Balaban, Martin Balsam, Richard Benjamin, Olimpia Carlisi, Art Garfunkel, Jack Gilford, Charles Grodin, Bob Newhart, Anthony Perkins, Paula Prentiss, Martin Sheen, Jon Voight, and Orson Welles.

Catch-22 is Joseph Heller’s first novel and his most acclaimed work. Set during World War II, the novel uses a distinctive non-chronological third-person omniscient narration, mainly focusing on the life of Captain John Yossarian, a U.S. Army Air Forces B-25 bombardier. Occasionally, the narrator also shows us how other characters, such as the chaplain or Hungry Joe, experience the world around them. As the novel’s events are described from the different points of view through separate out-of-sequence storylines, the timeline of Catch-22 develops along with the plot. The novel's title refers to a plot device that is repeatedly invoked in the story. Catch-22 starts as a set of paradoxical requirements whereby airmen mentally unfit to fly did not have to, but could not actually be excused. By the end of the novel, the phrase is invoked as the explanation for many unreasonable restrictions. “Catch-22” has since entered the English language and can be understood as an unsolvable logic puzzle, a difficult situation from which there is no escape. Upon publication, the book was not a best seller in the United States. It was merely a cult favorite until the publication of the paperback edition in 1962, which set record sales — most likely benefitting from a national debate about the pointlessness of the Vietnam War. Catch-22 has since been ranked as one of the 100 best English-language novels of the 20th century by the Modern Library, one of the 20th century's top 100 novels by the Radcliffe Publishing Course, and one of the 100 greatest novels of all time by The Observer.

clamshell box
A protective box designed for storing and preserving a bound book or loose sheets. A clamshell box is hinged on one side, with...[more]
fine
A book in fine condition exhibits no flaws. A fine condition book closely approaches As New condition, but may lack the...[more]
Cloth
"Cloth-bound" generally refers to a hardcover book with cloth covering the outside of the book covers. The cloth is stretched...[more]
morocco
Morocco is a style of leather book binding that is usually made with goatskin, as it is durable and easy to dye. (see also...[more]
First Edition
In book collecting, the first edition is the earliest published form of a book. A book may have more than one first edition in...[more]
title page
A page at the front of a book which may contain the title of the book, any subtitles, the authors, contributors, editors, the...[more]
octavo
Another of the terms referring to page or book size, octavo refers to a standard printer's sheet folded four times, producing...[more]
jacket
Sometimes used as another term for dust jacket, a protective and often decorative wrapper, usually made of paper which wraps...[more]
rubbing
Abrasion or wear to the surface. Usually used in reference to a book's boards or dust-jacket.