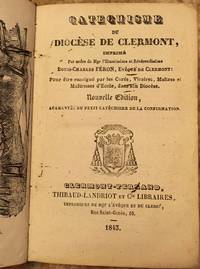 Catechisms du Diocese de Clermont, Par Ordre de Mgr L'Illustrissime et Reverendissims Louis-Charles Feron, Eveque de Clermont, Pour etre enseigne par les Cures, Vicaires, Maitres et Maitresses d'Ecole, dans son Diocese. Nouvelle Edition, Published by Thibaud-Landroit et Cie Libraires1843. (Catechisms of the Diocese of Clermont By Order of the Illustrious and Revered Louis-Charles Feron, Bishop of Clermont, To be taught by the Priests, Vicars, Masters and Mistresses of the School, in his Diocese.) Hardbound in full leather, Frontispiece illustration, Illustrated appendix with the stations of the cross, French text, 248 pages. Dimensions: 5-1/2-inches x 3-1/2-inches x 3/4-inches ---- Very Good Antiquarian Condition. Secure and tight binding, boards securely attached, front inner board and frontispiece illustration marked with antique notes from the 1800's, inner pages unmarked, some vintage fold and crease marks on some pages, some light fading and age spots, visible wear due to age including some minor scuffs, soiling, rubbed edges and corners, general surface wear. Please review pictures for greater detail. Free USA Shipping ---- Louis-Charles Féron (1793 - 1879) was a French Catholic prelate of the 19th century, and bishop of Clermont from 1834 to his death. Féron was born on November 30, 1794 in Saint-Grégoire-du-Vièvre in an old family of Norman laborers and merchants. He is the only son from the union of Jean-Charles Féron (1767-1853) and Marie-Anne Huard (1770-1853), married in Saint-Grégoire-du-Vièvre on February 18, 1793. The young man was ordained priest for the diocese of Évreux by Mgr Jean-Baptiste Bourlier on February 14 , 1818. Féron would later be appointed as archpriest of Notre-Dame cathedral and a member of the factory council in 1825. On this occasion he received the canon's hood from the cathedral chapter. Féron was appointed bishop of Clermont by royal ordinance dated November 21, 1833 and received the canonical investiture of Pope Gregory XVI on January 20, 1834. Féron was knighted into the Legion of Honor by imperial decree on December 28, 1854, and was promoted to the rank of officer on July 9, 1862 . After a long episcopate of forty-five years, Bishop Féron died at the Episcopal Palace of Clermont on December 24 , 1879 , 86 years old.

30 day return guarantee within the USA, with full refund including original shipping costs for up to 30 days after delivery if an item arrives misdescribed or damaged. Book sales within the USA include free USPS media mail shipping. Expedited shipping is available upon request. International shipping is also available upon request and multiple orders can often be combined under a single shipping cost.

Seller rating:
This seller has earned a 5 of 5 Stars rating from Biblio customers.
Biblio.com member since 2018
Seattle, Washington
Ask Seller a Question

BanditBooks specializes in selling new and used books, ephemera, printed and recorded music. My Biblio store has an ever-changing inventory of newly published releases, along with rare and collectible media. Questions and offers are always welcome. My professional goals include providing quality merchandise, accurate descriptions, and great customer service. Positive feedback is always appreciated if you are happy with your purchase. If for any reason you are dissatisfied with your order, please contact me. I am confident that my customer service, return, and refund policies can address any concern. Thank you for visiting!

tight
Used to mean that the binding of a book has not been overly loosened by frequent use.
edges
The collective of the top, fore and bottom edges of the text block of the book, being that part of the edges of the pages of a... [More]