Rare books Americana More Rare Books from The Lawbook Exchange Ltd The Charter Granted by Their Majesties [With] Acts and Laws, 1726 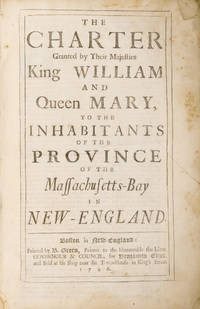 The Charter Granted by Their Majesties [With] Acts and Laws, 1726

The Charter Granted by Their Majesties [With] Acts and Laws, 1726

1726. Boston: Printed by B. Green, 1726.. Boston: Printed by B. Green, 1726. Scarce 1726 Printing of Massachusetts Acts and Laws [Massachusetts]. The Charter Granted by Their Majesties King William and Queen Mary, to the Inhabitants of the Province of the Massachusetts-Bay in New-England. Boston: Printed by B. Green, 1726. [ii], 14 pp. [Bound with] Acts and Laws of His Majesty's Province of the Massachusetts-Bay in New England. Boston: Printed by B. Green, 1726. [ii], 347, [1]; 349-354; 17 pp. As in many copies, the final 17-page table is misbound after p.354. Small folio (11-1/2" x 7-3/4"). Contemporary paneled sheep, rebacked in period-style, large corner fleurons to central panel, raised bands to spine, lower corner of front board mended, endpapers renewed. Moderate rubbing and a few minor stains to boards, heavier rubbing to board edges extremities with wear to and corners. Moderate toning to text, occasional light foxing to margins, some edgewear to margins of leaves at beginning and end of text block. $5,000. * Issued when the province included Maine and parts of Nova Scotia, this compilation contains a complete record of the acts and laws from 1692 to 1725. It provides unparalleled insights into the colony's attitude towards Indians, "Free Negroes," piracy, buggery, bestiality, incest, "Jesuits and Popish priests," the killing of bastard children by their mothers, "misspending money in taverns," "keeping the Lord's day," adultery, polygamy and many other social and political topics. Especially important is the newly adopted modification to the Charter granted by William and Mary, King George's "Explanatory Charter" (pp. 13-14), which appeared for the first time in this book. It reduced the independence of the colony by shifting power to the crown-appointed provincial governor, who was given sole power to adjourn the House of Representatives and given the right to veto the House's choice of speaker. Though technically two books, the charter and laws are almost always bound together. Many copies contain subsequent compilations of acts (that continue the pagination past p. 347). Ours has a group of four acts passed between May 25 and November 23, 1726. Evans, American Bibliography 2762. Benedict, Acts and Laws of the Thirteen Original Colonies and States 122. The Charlemagne Tower Collection of Colonial Laws 215.

spine
The outer portion of a book which covers the actual binding. The spine usually faces outward when a book is placed on a shelf....[more]
leaves
Very generally, "leaves" refers to the pages of a book, as in the common phrase, "loose-leaf pages." A leaf is a single sheet...[more]
folio
A folio usually indicates a large book size of 15" in height or larger when used in the context of a book description....[more]
edges
The collective of the top, fore and bottom edges of the text block of the book, being that part of the edges of the pages of a...[more]
raised band(s)
Raised bands refer to the ridges that protrude slightly from the spine on leather bound books.  The bands are created...[more]
rebacked
having had the material covering the spine replaced. ...[more]
rubbing
Abrasion or wear to the surface. Usually used in reference to a book's boards or dust-jacket.
text block
Most simply the inside pages of a book.  More precisely, the block of paper formed by the cut and stacked pages of a...[more]
New
A new book is a book previously not circulated to a buyer. Although a new book is typically free of any faults or defects,...[more]