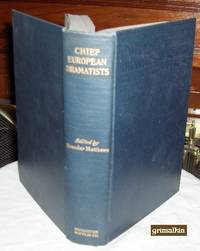 The Chief European Dramatists: Twenty-One Plays from the Drama of Greece, Rome, Spain, France, Italy, Germany, Denmark, and Norway from 500 B.C. To 1879 A.D.

The Chief European Dramatists: Twenty-One Plays from the Drama of Greece, Rome, Spain, France, Italy, Germany, Denmark, and Norway from 500 B.C. To 1879 A.D.

Houghton Mifflin, 1916. This thoughtfully conceived collection is a First Printing, with only a 1916 copyright date and no further printing history. (Later printings and editions are stated as such.) The book is in close to Fine condition (click on photo). It includes 21 plays from the greatest drama and comedy of Greece, Rome, Spain, France, Italy, Germany, Denmark, and Norway, from 500 B.C. to 1879 A.D. It does not include any classical plays from Great Britain, which are easily found in other collections, but concentrates instead on the rest of Europe. The complete contents are as follows: Agamemnon by Aeschylus, translated by E.D.A. Morshead; Oedipus the King by Sophocles, translated by Sir Richard Claverhouse Jebb; Medea by Euripides, translated by Gilbert Murray; The Frogs by Aristophanes, translated by J. Hookham Frere; The Captives by Plautus, translated by Edward H. Sugden; Phormio by Terence, translated by Morris H. Morgan; The Star of Seville by Lope de Vega, translated by Philip M. Hayden; Life Is a Dream by Calderon, translated by Denis Florence Mac-Carthy; The Cid by Corneille, translated by Florence Kendrick Cooper; Tartuffe by Moliere, translated by Curtis Hidden Page; Phaedra by Racine, translated by Robert Bruce Boswell; The Barber of Seville by Beaumarchais, translated by Arthur B. Myrick; Hernani by Victor Hugo, translated by Mrs. Newton Crosland; The Son-in-Law of M. Poirier, by Augier and Sandeau, translated by Barrett H. Clark; The Outer Edge of Society, by Alexander Dumas, fils, translated by Barrett H. Clark; The Mistress of the Inn by Goldoni, translated by Merle Pierson; Minna von Barnhelm by Lessing, translated by Ernest Bell; Goetz von Berlichinger by Goethe, translated by Sir Walter Scott; William Tell by Schiller, translated by Sir Theodore Martin; Rasmus Montanus by Holberg, translated by Oscar James Campbell and Frederic Schenck; A Doll's House by Henrik Ibsen, translated by William Archer. Additionally, the extensive Appendix includes Notes on the Authors, Notes on the Plays, and A Reading List in European Dramatists. The book has navy blue cloth covers, blind-stamped titles on the front panel, and bright gilt titles on the spine. Shelf rubbing is only minimal. As for the interior, the hinges are secure, the binding is tight, and the pages are bright and sparkling throughout, with no marks, stains, tears, or foxing. There is a signature on the front endpaper of the original owner. The book measures 5 ½ by 8 ¼ inches, and includes 786 pages. . First Edition. Hard Cover. Fine/No Jacket. 8vo - over 7¾" - 9¾" tall.

Grimalkin Books is located in Steelton, Pennsylvania, the first town south of Harrisburg. We specialize in older, unusual books and sets, often literary, artistic, or historical. "Grimalkin" is old English for an old gray cat, mainly because the owner, Bob Amsel, is a cat lover. All books subject to prior sale. Payment must be received within 10 days of the order or item will be returned to stock. We accept money orders, bank checks, personal checks (allow time to clear), PayPal or MasterCard/Visa through Biblio's credit card processing service. International orders must be paid in US dollars and can be paid via PayPal, credit card (through ABE), or International Postal Money Order. Your purchase will be carefully packaged to protect it during shipping. Books may not be returned just because the buyer has changed his mind. Only books with actual defects that were not mentioned by the seller in the listing may be returned. Please insure returns for their full value.

Seller rating:
This seller has earned a 5 of 5 Stars rating from Biblio customers.
Biblio.com member since 2005
Steelton, Pennsylvania
Ask Seller a Question

spine
The outer portion of a book which covers the actual binding. The spine usually faces outward when a book is placed on a shelf.... [More]
jacket
Sometimes used as another term for dust jacket, a protective and often decorative wrapper, usually made of paper which wraps... [More]
Cloth
"Cloth-bound" generally refers to a hardcover book with cloth covering the outside of the book covers. The cloth is stretched... [More]
gilt
The decorative application of gold or gold coloring to a portion of a book on the spine, edges of the text block, or an inlay in... [More]
First Edition
In book collecting, the first edition is the earliest published form of a book. A book may have more than one first edition in... [More]
fine
A book in fine condition exhibits no flaws. A fine condition book closely approaches As New condition, but may lack the... [More]
tight
Used to mean that the binding of a book has not been overly loosened by frequent use.
rubbing
Abrasion or wear to the surface. Usually used in reference to a book's boards or dust-jacket.