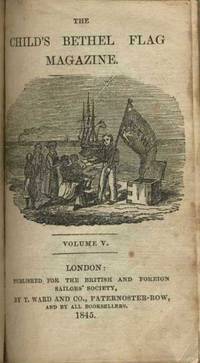 London: T. Ward and Co., Paternoster Row, 1845. Hardcover. Very good. With content on China, tea, South Australia, the sea elephant and pearl diving. With a chapter at p67, "Notices of China and the Chinese", with an engraved and illustrated table "Emblems of Trade and Religion in China", stating "Tea first brought to England in 1610. Tea brought to England in 1755, about 4,000,000 lbs. Tea brought to England in 1844, about 40,000,000 lbs." A chapter entitled "The First College in South Australia", states "South Australia is a new British colony, not ten years old ... its population already amounts to 18,000 souls", p251. The sea elephant description includes an engraving based on an illustration in Charles Medyett Goodridge's volume of 1820 describing his shipwreck in the South Seas. With a four page article on pearl diving, p311. 24mo, viii, 376pp, b&w engravings throughout. Three quarter red leather and marbled boards, gilt title at red spine. Covers rubbed, esp at marbled boards. Internally, child's signature and date 1845 at ffep, o/w very good.

Seller rating:
This seller has earned a 2 of 5 Stars rating from Biblio customers.
Biblio.com member since 2009
Garrison, New York
Ask Seller a Question

gilt
The decorative application of gold or gold coloring to a portion of a book on the spine, edges of the text block, or an inlay in... [More]
New
A new book is a book previously not circulated to a buyer. Although a new book is typically free of any faults or defects,... [More]
Marbled boards
... [More]
o/w
An abbreviation for otherwise
ffep
A common abbreviation for Front Free EndPaper. Generally, it is the first page of a book and is part of a single sheet that... [More]
spine
The outer portion of a book which covers the actual binding. The spine usually faces outward when a book is placed on a shelf.... [More]