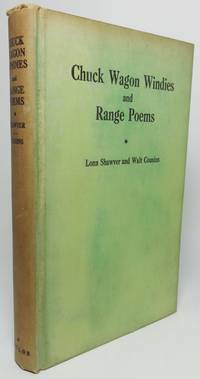 San Antonio, Texas: The Naylor Company, 1934. [8], 192 pages, plus frontispiece and three full-page photographic plates. Original green cloth lettered in black. [20.1 cm.] Cloth faded to tan on spine and rather unevenly on covers; light foxing and soiling to covers. Endpapers foxed. Leaves are tanned throughout, as expected, due to the inexpensive wood-pulp paper used. Interior is otherwise clean and unmarked. Good only, but scarce in any condition. Bookplate on the front pastedown designed by Ainslee Hewett, a noted artist of Louisville, Kentucky, in the Arts and Crafts style for which he was noted. [The bookplate, dated 1913, was made for Edwin Vivian and Ida Belle Halbreath Thompson, of Louisville, and bears their names and a quote by Ruskin within an ornately decorated border.] FIRST EDITION, limited. #191 of an unknown number of copies. SIGNED BY THE AUTHOR, LONA SHAWVER, on the title page. Stories of cowboys and life on the West Texas range, including a trial of Indian for murder, a ranch dance, horse doctors, Buffalo hunting, Old Tascosa, a revival meeting, horse trading, etc. The first chapter is a brief review of the cattle industry. Most of the rest of the book consists of firsthand recollections by cattlemen as told to Shawver, although it is often unclear who the narrator was. Some of the folks quoted or mentioned in the book are Clyde Burnett, Frank Canton, Frank Thomas, Tom Carson, Henry Taylor, Jack Havers, Tad Moses, W.H. Patrick, Dan Barkus, Slim Johnson, Parson Brown, Marvin Hunter, and William "Lod" Calohan. Each of the prose pieces is followed by a poem by Walter Henry Cousins (1879-1942). Cousins worked as bronco buster in Texas and as a camp cook on trails drives in Oklahoma, before becoming a pharmacist and author. He previously wrote "Cuz; I ams, Poems and Papers" (1922). Lona (née Thomason) Shawver (1878-1960) was a native of Irving, Dallas County, Texas. This appears to have been her first and only book.

We offer a full refund, including the purchase price and the original shipping cost, in the event an item is not as described in the listing, provided that we receive the returned item within 30 days after delivery. We will refund the purchase price, but not the shipping, for any other reason, within ten (10) days of delivery, provided we are given prior notification of the return (please email or phone) and all items are returned in the condition in which they were received.

Seller rating:
This seller has earned a 5 of 5 Stars rating from Biblio customers.
Biblio.com member since: 2008
Durham, North Carolina
Ask Seller a Question

An online shop focusing on Americana, particularly books pertaining to the South, and offering rare, scholarly, and antique books on a variety of other subjects. Proprietor David J. Eilenberger worked for over five years at respected firms in the A.B.A.A. before establishing the company in 2010. In addition to books, we are interested in acquiring broadsides, ephemera, 19th-century photographs, and manuscripts. Member Independent Online Booksellers Association since 2017.

leaves
Very generally, "leaves" refers to the pages of a book, as in the common phrase, "loose-leaf pages." A leaf is a single sheet...[more]
bookplate
Highly sought after by some collectors, a book plate is an inscribed or decorative device that identifies the owner, or former...[more]
foxed
Foxing is the age related browning, or brown-yellowish spots, that can occur to book paper over time. When this aging process...[more]
First Edition
In book collecting, the first edition is the earliest published form of a book. A book may have more than one first edition in...[more]
Cloth
"Cloth-bound" generally refers to a hardcover book with cloth covering the outside of the book covers. The cloth is stretched...[more]
spine
The outer portion of a book which covers the actual binding. The spine usually faces outward when a book is placed on a shelf....[more]
title page
A page at the front of a book which may contain the title of the book, any subtitles, the authors, contributors, editors, the...[more]