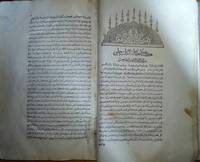 FIrst page of the preface and last page of the index are facsimiles, else; complete with 39 original maps and shapes, mint condition and wide complete margins. 698pp of Ottoman Turkish text, printed by Ibrahim Muteferrika in 1145 AH. - 1732 AD. In contemporary hard covers binding. FIRST AND ONLY EDITION OF THE JIHANNUMA. Planned as a great cosmosgraphy, the work was never completed, although Katib Celebi wrote two versions. The text contained here is the second version, rewritten after the author had acquired a Mercator-Hondius Atlas minor (Koemans mistakenly considered the Jihannuma a translation into Turkish of that Atlas). It covers the world from Japan to the Ottoman borders and is well-illustrated with engraved maps, including: the World in twin hemispheres, the World in oval projection, Europe, Africa, Asia, America, the North and South Poles, Arabia, Japan and various other parts of Asia and Asia Minor. Several of the maps and diagrams had appeared in earlier books printed by Mteferrika.
The author, born Mustafa ibn Abd Allah at Constantinople in 1609, was a prolific scholar, historian, geographer, and bibliophile. Another of his works, Tuhfet l-Kibar fi esfar il bihar was published only 4 years earlier at the same press, and was the first geographical work to be printed in Turkey. Mteferrika added to the Jihannuma a section concerning the ideas of Copernicus and Tycho Brahe. Koemans II, 549 cites 37 plates; Toderini p.114ff. cites 39; and copies are known with 41. (Christies note).

Seller rating:
This seller has earned a 5 of 5 Stars rating from Biblio customers.
Biblio.com member since 2008
Riyadh
Ask Seller a Question