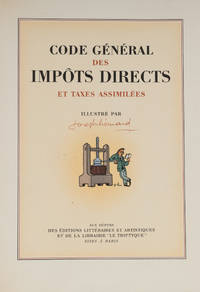 1944. Uncut, Unbound Copy of Hemard's Illustrated French Tax Code Hemard, Joseph [1880-1961], Illustrator. Code General des Impots Directs et Taxes Assimilees. Texte Integral des Lois, Decrets, Decrets-Lois, Decret de Codification, Suivi d'un Formulaire Administratif. Paris: Editions Litteraires et Artistiques/Librairie "Le Triptyque", [1944]. x, 330, [1] pp. 183 illustrations, 62 of them in color. 8 pp. addendum of changes to the code, titled Rectificatif, laid in, Quarto (9-1/4" x 6-1/2"). Uncut, unbound in signatures, as issued, copy in publisher's wrappers housed in publisher's chemise and slipcase. Light soiling and edgewear to slipcase and spine of chemise, which has some discoloration around its lower corners, lower joints of slipcase beginning to crack. Offsetting to margins of endleaves, rear joint cracked at ends, negligible light toning to text, images vivid. $750. * From an edition limited to 800 copies, this number 744. Hemard presents the official text of the French Tax Code with witty, often racy illustrations, colored (au pochoir) by E. Charpentier. It is a sequel to his Code Civil: Livre Premier, Des Personnes (1925) and Code Penal: Commentaires Images (c. 1940). Hemard, a prolific artist, illustrator, designer and author, is best-known for his humorously illustrated editions of serious non-fiction books. The Code General was issued in several forms. The first 145 copies of the 800-copy edition also included an original sheet of text illustrations and a sheet of their original sketches. It was also issued in an unnumbered trade edition of a thousand copies. There is also a signed and numbered edition of 160 printed on Arches paper (papier velin), an edition of 40 non-commercial copies intended for friends and associates (hors commerce) and 60 portfolios of the images alone.

Unbound
A book or pamphlet which does not have a covering binding, sometimes by original design, sometimes used to describe a book in...[more]
cracked
In reference to a hinge or a book's binding, means that the glue which holds the opposing leaves has allowed them to separate,...[more]
spine
The outer portion of a book which covers the actual binding. The spine usually faces outward when a book is placed on a shelf....[more]
quarto
The term quarto is used to describe a page or book size. A printed sheet is made with four pages of text on each side, and the...[more]
wrappers
The paper covering on the outside of a paperback.  Also see the entry for pictorial wraps, color illustrated coverings for...[more]