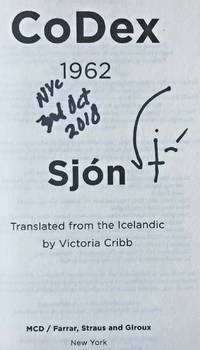 5 Copies Available from This Seller

HARDCOVER. SIGNED in Person at the Book Signing Event. CoDex 1962 A Trilogy by Sjón Translated from the Icelandic by Victoria Cribb (2018). SIGNED, Dated, (3rd Oct 2018), and NYC wrote to the Full Title page by Sjon, the author. Brand New and Never owned. This is a FIRST Edition, FIRST Printing copy as stated on the copyright page. Dust jacket is in Brand New condition with no issues. Book has no tears, marks, creases, remainder marks, library markings, or black lines on the edges. Not inscribed to anyone. Not price-clipped, not a Book Club Edition (BCE), or signed on a bookplate. True Collectible Quality. First Edition, First Printing, hand SIGNED, Dated, 3rd Oct 2018, & NYC to the Full Title page. No inscription; full signature plus 3rd Oct 2018 and NYC only. From an event featuring Sjón in conversation with Laurie Anderson in New York City on October 3, 2018. FREE: Copies of four book reviews and a copy of the complete four-page program are included. FREE USPS Media Mail Shipping in the United States & Territories. Any book that I ship that has a Dust jacket will be protected by a New, Clear, Removable Acid-Free Cover. This book will be carefully wrapped and shipped with free delivery confirmation. **** Born in Reykjavik in 1962, Sjón is a celebrated Icelandic author whose novels have been published in over thirty-five languages. He won the Nordic Council's Literary Prize for his novel The Blue Fox (the Nordic countries' equivalent of the Man Booker Prize) and the novel From The Mouth Of The Whale was shortlisted for both the International IMPAC Dublin Literary Award and the Independent Foreign Fiction Prize. The novel Moonstone – The Boy Who Never Was received every literary prize in Iceland, including the coveted Icelandic Literary Prize. CoDex 1962, a novel in three books written over 25 years, was published in Iceland in 2016 to great acclaim. As a poet, librettist, and lyricist, Sjón has published more than a half dozen poetry collections, written four opera libretti, and lyrics for various artists. In 2001 he was nominated for an Oscar for his lyrics in the film Dancer In The Dark. Sjón is the president of PEN International's Icelandic Centre and lives in Reykjavik with his wife and two children. Victoria Cribb has spent the last twenty-five years immersed in Iceland's language and literature. After reading Old Icelandic at Cambridge, she took an MA in Scandinavian Studies at University College London and a BPhil in Icelandic at the University of Iceland, before working in Iceland for a number of years as a publisher, journalist, and translator. Since 2002 she has lived in London, working as a freelance translator, and currently also teaches Icelandic at University College London and in Cambridge. Her translations include Sjón's The Blue Fox, From The Mouth Of The Whale, The Whispering Muse, and Moonstone – The Boy Who Never Was, and three novels in collaboration with Olaf Olafsson, as well as countless other works of fiction and nonfiction, published in books, anthologies, and magazines. CoDex 1962: A Trilogy was published on September 11, 2018. ISBN: 978-0374-1256-39. BS13190.

remainder
Book(s) which are sold at a very deep discount to alleviate publisher overstock. Often, though not always, they have a remainder...[more]
First Edition
In book collecting, the first edition is the earliest published form of a book. A book may have more than one first edition in...[more]
book club edition
A generic term denoting a book which was produced or distributed by one of any number of book club organizations. Usually the...[more]
edges
The collective of the top, fore and bottom edges of the text block of the book, being that part of the edges of the pages of a...[more]
title page
A page at the front of a book which may contain the title of the book, any subtitles, the authors, contributors, editors, the...[more]
New
A new book is a book previously not circulated to a buyer. Although a new book is typically free of any faults or defects,...[more]
Copyright page
The page in a book that describes the lineage of that book, typically including the book's author, publisher, date of...[more]
inscribed
When a book is described as being inscribed, it indicates that a short note written by the author or a previous owner has...[more]
bookplate
Highly sought after by some collectors, a book plate is an inscribed or decorative device that identifies the owner, or former...[more]
jacket
Sometimes used as another term for dust jacket, a protective and often decorative wrapper, usually made of paper which wraps...[more]