Home > Henry Sotheran Ltd. > In Cold Blood: A True Account of a Multiple Murder and… 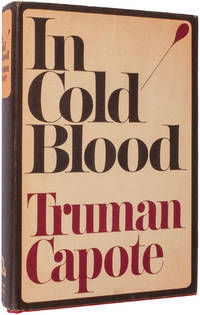 In Cold Blood: A True Account of a Multiple Murder and Its Consequences.

In Cold Blood: A True Account of a Multiple Murder and Its Consequences.

1965. New York: Random House, [1965]. 8vo. Original maroon cloth with 'T.C' initials in gold to upper cover and gilt lettering/publisher's device direct to spine; top edge black; pp. [xii], 343, [i]; a very good copy - small staple holes to ffep where tipped-in article has been removed, very slight compression to spine ends; in a near-fine dust jacket with just a little darkening to spine and light nicks to head and foot. First edition of this classic true crime account, in correct first issue dustjacket, with the "1/66" code on the front flap and "Publishers of the American College Dictionary and the Modern Library" on the rear flap. Non-fiction novel which details the investigation of Capote and his close friend Harper Lee into the Herbert Clutter murders. It was to become one of the highest selling true crime books of all time. Three film adaptations based upon the book have been produced. The first focuses on the details of the book, whereas the later two explore Capote's fascination with researching the novel. The first adaptation was the 1967 film of the same name by Richard Brooks, who directed and adapted the screenplay. It starred Robert Blake as Perry Smith and Scott Wilson as Richard Hickock. John Forsythe played the investigator (Alvin Dewey), from the Kansas Bureau of Investigation, who apprehended the killers. The film, shot in black and white, was nominated for four Academy Awards: Best Director, Best Original Score, Best Cinematography, and Best Adapted Screenplay. The second and third film adaptations tell the story of Capote's experiences in writing the story and his subsequent fascination with the murders. Capote (2005) starred Philip Seymour Hoffman, who won the Academy Award for Best Actor for his portrayal of Truman Capote, Clifton Collins, Jr. as Perry Smith, and Catherine Keener as Harper Lee.The film was critically acclaimed, and was nominated for five Academy Awards: Best Picture, Best Actor (Hoffman), Best Supporting Actress (Keener), Best Director (Bennett Miller), and Best Adapted Screenplay (Dan Futterman). A year later the 2006 film Infamous , starring Toby Jones as Capote, Daniel Craig as Smith, and Sandra Bullock as Lee, was released to favorable reviews.

In Cold Blood is a 1966 book by American author Truman Capote. The book details the brutal 1959 murders of Herbert Clutter, a wealthy farmer from Holcomb, Kansas, and his wife and two of their children. When Capote learned of the quadruple murder before the killers were captured, he decided to travel to Kansas and write about the crime.

Seller rating:
This seller has earned a 5 of 5 Stars rating from Biblio customers.
Biblio.com member since: 2018
London, London
Ask Seller a Question

Founded in York in 1761 and established in London on 1815, Henry Sotheran Limited has a long and distinguished history.For over 250 years we have been offering unsurpassed opportunities to collectors. Throughout our history we have prided ourselves on the quality and condition of our books and our friendly service.Our premises just off Piccadilly in the heart of London's West End are spacious and elegantly appointed and we welcome regular clients and passers-by alike to wander in and browse in a relaxing and convivial atmosphere.

First Edition
In book collecting, the first edition is the earliest published form of a book. A book may have more than one first edition in...[more]
ffep
A common abbreviation for Front Free EndPaper. Generally, it is the first page of a book and is part of a single sheet that...[more]
jacket
Sometimes used as another term for dust jacket, a protective and often decorative wrapper, usually made of paper which wraps...[more]
Cloth
"Cloth-bound" generally refers to a hardcover book with cloth covering the outside of the book covers. The cloth is stretched...[more]
spine
The outer portion of a book which covers the actual binding. The spine usually faces outward when a book is placed on a shelf....[more]
device
Especially for older books, a printer's device refers to an identifying mark, also sometimes called a printer's mark, on the...[more]
New
A new book is a book previously not circulated to a buyer. Although a new book is typically free of any faults or defects,...[more]
gilt
The decorative application of gold or gold coloring to a portion of a book on the spine, edges of the text block, or an inlay in...[more]

Home > Henry Sotheran Ltd. > In Cold Blood: A True Account of a Multiple Murder and…