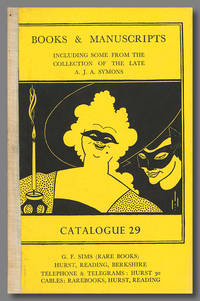 [A Collection of 29 Specially Bound and Interleaved Catalogues]

[A Collection of 29 Specially Bound and Interleaved Catalogues]

Peacocks, Hurst, Berkshire, 1974. 29 volumes (plus two duplicates). Octavo. Sewn cloth-tape backed pictorial or typographic boards. Some dusting or rubbing to boards, binder's tape yellowed at inner hinges of some early numbers, but a good lot. A broad cross section of the superb antiquarian catalogues issued by George Sims, here in the form of the interleaved, boardbound special copies he had prepared for his own use. "Of these specially bound copies Sims has noted 'only two were done of each catalogue ... specially made for my own use, to list the customers who bought items, duplicate orders, etc. More often than not we only used one interleaved copy ...'" - David Holmes. GEORGE SIMS & FRIENDS (item 102). Present here are catalogues 18, 21, 22, 24-6, 28, 29, 35, 37-9, 42, 44, 45, 57, 52, 54, 59, 62, 64, 65, 67, 69, 70, 72, 74, 87 and 88, plus two additional copies of 69, suggesting that at least four were produced in that instance. Simply put, in his fields, the modestly produced catalogues of George Sims offered perhaps the richest array of interesting material handled by any British bookseller of his generation.

Seller rating:
This seller has earned a 4 of 5 Stars rating from Biblio customers.
Biblio.com member since: 2006
New Haven, Connecticut
Ask Seller a Question

octavo
Another of the terms referring to page or book size, octavo refers to a standard printer's sheet folded four times, producing...[more]
rubbing
Abrasion or wear to the surface. Usually used in reference to a book's boards or dust-jacket.