Home Jonathan A. Hill, Bookseller, Inc. A collection of approximately 1650 chopstick wrappers, all of Japanese origin, pasted in four 8vo and two large… 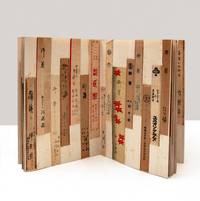 Japan: ca. 1920-30.<br /> <P>A remarkable collection of more than 1600 Japanese chopstick wrappers, all carefully mounted in six albums. The wrappers vary from very plain to highly elaborate and offer a wide range of design and typography. Many have telephone numbers. The anonymous collector painstakingly (and lovingly) assembled this collection in the 1920s and 1930s; the wrappers advertise famous and forgotten restaurants, which served mostly Japanese but also Chinese and Western cuisines, from almost everywhere in Japan, ranging from Hokkaido in the north to Kyushu in the south, including Tokyo, Kyoto, Osaka, prominent hot spring resorts, and many famous sightseeing destinations. The restaurants served a wide range of cuisines including sushi, kaiseki, vegetarian foods in temples, health foods, various kinds of Western foods, etc. Most of the restaurants were located in major cities, but our indefatigable collector has gathered wrappers from restaurants in local train stations, country inns, bunraku and kabuki theaters, and hundreds of other food establishments, most of which no longer exist.<br /> <P> The first four albums (230 x 155 mm.) are bound in the original wrappers, which have been decorated by the collector with drawings of entrances to restaurants. Each volume has a manuscript label pasted on the upper wrapper, reading Kuidoraku (Gourmandism). Additionally, each volume has on the first folded leaf a poem or story in manuscript about the pleasures of food. These are illustrated with four scenes of happy times at the Japanese table, including one depicting foreigners. The final two albums (305 x 210 mm. and 280 x 180 mm.) are bound in silk-covered boards and are accordion-style.<br /> <P> The collector must have been a wealthy gourmet to have travelled so widely and eaten so well, and making these albums was a long-term commitment. In the early 20th century, there was a popular style of fiction in Japan, called the gastronomic novel, where food was the primary subject. This literary movement had wide ramifications in eating styles and tastes throughout Japan and introduced the consumption of meat and European cuisines.<br /> <P> In fine condition.

5 day return guarantee, with full refund including shipping costs for up to 5 days after delivery if an item arrives misdescribed or damaged.

About Jonathan A. Hill, Bookseller, Inc.

fine
A book in fine condition exhibits no flaws. A fine condition book closely approaches As New condition, but may lack the... [More]
wrappers
The paper covering on the outside of a paperback. Also see the entry for pictorial wraps, color illustrated coverings for... [More]