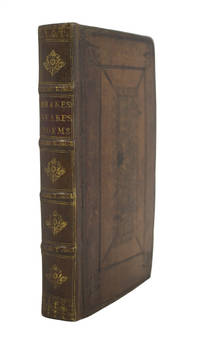 The Second Collected Edition, but First Complete Edition of Shakespeare's Poems SHAKESPEARE, William. A Collection of Poems, In Two Volumes; Being all the Miscellanies of Mr. William Shakespeare,. which were Publish'd by himself in the Year 1609 and now correctly Printed from those Editions. The First Volume contains, I. Venus and Adonis. II. The Rape of Lucrece. III. The Passionate Pilgrim. IV. Some Sonnets set to sundry Notes of Musick. The Second Volume contains One Hundred and Fifty Four Sonnets, all of them in Praise of his Mistress. II. A Lover's Complaint of his Angry Mistress. London: for Bernard Lintott, [1709-10]. This is the second collected edition (the first being 1640), but first complete edition of Shakespeare's poems, second issue of volume I, with the dates of 1609 on the part-titles and first issue of volume II. Two octavo volumes in one (6 5/16 x 3 3/4 inches; 160 x 94 mm). [iv], [1]-155, [1, blank]; [4], 98 pp. With volume titles and part-titles. With engraved frontispiece portrait by G. Van der Gucht. Contemporary paneled calf, rebacked to style. Boards paneled in blind. Spine stamped and ruled in gilt. Red morocco spine label, lettered in gilt. Board edges gilt. Edges speckeled red. Newer endpapers.Six pages in "Lucrece" in volume I trimmed close at fore-edge, affecting the side notes. A small hole to headline of page 85 in volume I. A small hole to bottom margin of page 29 of volume II, not affecting text. Leaves of signature F in volume II bound out of order, but complete. Overall a very handsome, clean copy. Housed in a full red morocco clamshell. This second issue is distinguished by the date of 1609 given on four of the part-titles of volume one, in contrast to the first issue with the early dates of 1630, 1632, 1599 and 1599. Jaggard only knew of the first volume of this first issue, stating that the two-volume issue appeared in 1710 with the early dates given on the part-titles revised to 1709 (Jaggard's error for 1609). Ford gives a more detailed account of the publication: beginning with the initial printing of the first volume only; followed 'shortly after' by the addition of the second volume with a general title; followed by a publication of both volumes with the subtitle imprints revised to 'Printed in the year 1609'. Although this is the "second collected edition" of poems, after the Benson 1640 edition, this is the first complete edition. Benson famously excluded 8 sonnets from his edition that were present in the Sonnet's first collected appearance of 1609 by Thorpe. These 8 (Nos. 18, 19, 43, 56, 75, 76, 96, and 126) are included here in Lintott's edition, namely Sonnet 18 which begins with the famous line "Shall I compare thee to a Summer's day? In addition to excluding these 8 Sonnets, Benson regrouped many of the Sonnets and changed pronouns from masculine to feminine. In the present edition, Lintott used the 1609 version of the Sonnets and printed them word for word making them not only the the most accurate version but also the first attainable version of the extracted 8 poems as only a handful of copies of the 1609 edition are known. Benson also excluded the long poems Venus and Adonis and the Rape of Lucree which are included in the present edition. The Lintott edition was evidently an opportunistic enterprise occasioned by the publication of Rowe's edition of Shakespeare's plays by Tonson in 1709. Tonson had rights only to the Fourth Folio plays, and Lintott evidently responded to demand for a new edition of the poems, as did the printer Curll, whose 1710 edition of the poems is occasionally found making a supplementary volume to Rowe's edition. While Curll's one-volume edition of the poems came to be seen as the natural companion to the Rowe plays, Lintott's edition takes primacy. Curll's version used the Benson version for his reprinting, making the Lintott edition more true to the original and thus more desirable. Ford, pp 37-39. Jaggard, p. 434. HBS 68222. $27,500

folio
A folio usually indicates a large book size of 15" in height or larger when used in the context of a book description....[more]
rebacked
having had the material covering the spine replaced. ...[more]
calf
Calf or calf hide is a common form of leather binding.  Calf binding is naturally a light brown but there are ways to treat...[more]
G
Good describes the average used and worn book that has all pages or leaves present. Any defects must be noted. (as defined...[more]
New
A new book is a book previously not circulated to a buyer. Although a new book is typically free of any faults or defects,...[more]
morocco
Morocco is a style of leather book binding that is usually made with goatskin, as it is durable and easy to dye. (see also...[more]
gilt
The decorative application of gold or gold coloring to a portion of a book on the spine, edges of the text block, or an inlay in...[more]
leaves
Very generally, "leaves" refers to the pages of a book, as in the common phrase, "loose-leaf pages." A leaf is a single sheet...[more]
spine
The outer portion of a book which covers the actual binding. The spine usually faces outward when a book is placed on a shelf....[more]
edges
The collective of the top, fore and bottom edges of the text block of the book, being that part of the edges of the pages of a...[more]
octavo
Another of the terms referring to page or book size, octavo refers to a standard printer's sheet folded four times, producing...[more]
spine label
The paper or leather descriptive tag attached to the spine of the book, most commonly providing the title and author of the...[more]