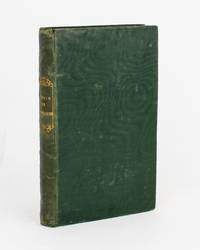 Colonization, particularly in Southern Australia. With Some Remarks on Small Farms and Over-population

Colonization, particularly in Southern Australia. With Some Remarks on Small Farms and Over-population

London: T. & W. Boone, 1835. First Edition. Hardcover. London, T. & W. Boone, 1835. Octavo, xxxii, 268, [4] (publisher's advertisements) pages. Original green watered cloth lettered and decorated in gilt on the spine; cloth a little scuffed and marked, with minor wear to the extremities; spine a little sunned, with an old repair in green cloth to the foot of the rear joint and the spine proper; top edge a little darkened, leading edge a little foxed; endpapers slightly marked, offset and foxed, with occasional light foxing elsewhere; inner hinges cracked but firm (the text block appears to have been loose at some stage, and it has been reinserted inexpertly, resulting in the leading edges of the first half of the book, in two discrete groups of gatherings, being proud of the remainder); notwithstanding, a very decent copy. The front flyleaf is inscribed in ink 'To The Honble Mrs Byng from her old and very sincere friend The Author. Portsmouth 19 June 1835'. A Byng family armorial bookplate ('Tuebor', I Will Defend) is mounted on the pastedown (offsetting a little onto the inscription). In 'August 1834 a committee of emigrants had approached Sir Charles Napier [1782-1853], one of the famous Peninsular War brothers [inviting him to apply for the post of Governor of the new colony of South Australia]; the Colonial Office had been considering Sir John Franklin, but withdrew in favour of Napier' (Dutton: 'Founder of a City'). Napier subsequently withdrew his nomination on 20 May 1835 'when his request for power to draw on the government for funds and for an adequate defence force was refused' (Pike: 'Paradise of Dissent'). In the preface to this book, dated 1 May 1835, Napier observes 'a former Colonial Secretary having selected me as a fit subject for transportation, it is probable that the sentence may, at some future period, be carried into execution. In the interim, my time could not be better employed than in discussing the subject of our expedition, and the more I consider it, the more I think it likely to answer your expectations; but the dearth of information relative to the shores of Spencer's Gulf is lamentable. I have, in the following pages, collected all the objections I can discover, and thus done what is in my power to prepare for meeting the obstacles which we may have to encounter'. It is immediately followed by a 22-page notice, dated not later than 29 May; it commences 'This book was ready for publication when, on the 20th of this month I had an interview with Lord Glenelg ...' and it goes on to explain at great length why he took his course of action. Ferguson 1991.

octavo
Another of the terms referring to page or book size, octavo refers to a standard printer's sheet folded four times, producing...[more]
Gatherings
A term used in bookbinding, where a gathering of sheets is folded at the middle, then bound into the binding together. The...[more]
Cloth
"Cloth-bound" generally refers to a hardcover book with cloth covering the outside of the book covers. The cloth is stretched...[more]
bookplate
Highly sought after by some collectors, a book plate is an inscribed or decorative device that identifies the owner, or former...[more]
sunned
Damage done to a book cover or dust jacket caused by exposure to direct sunlight.  Very strong fluorescent light can cause...[more]
spine
The outer portion of a book which covers the actual binding. The spine usually faces outward when a book is placed on a shelf....[more]
First Edition
In book collecting, the first edition is the earliest published form of a book. A book may have more than one first edition in...[more]
foxed
Foxing is the age related browning, or brown-yellowish spots, that can occur to book paper over time. When this aging process...[more]
inscribed
When a book is described as being inscribed, it indicates that a short note written by the author or a previous owner has...[more]
New
A new book is a book previously not circulated to a buyer. Although a new book is typically free of any faults or defects,...[more]
offset
A technique of printing where the inked image or text is ...[more]
text block
Most simply the inside pages of a book.  More precisely, the block of paper formed by the cut and stacked pages of a...[more]
cracked
In reference to a hinge or a book's binding, means that the glue which holds the opposing leaves has allowed them to separate,...[more]
edges
The collective of the top, fore and bottom edges of the text block of the book, being that part of the edges of the pages of a...[more]
gilt
The decorative application of gold or gold coloring to a portion of a book on the spine, edges of the text block, or an inlay in...[more]