Home rare books Americana More Rare Books from Schilb Antiquarian Rare Books Colton's condensed octavo atlas of the Union: containing maps of all the states and territories of the United… 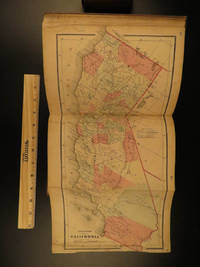 Joseph Hutchins Colton had begun publishing maps in New York in the 1830s. Between 1831 and 1890, the Colton firm dominated American map publishing, although Colton had no formal training in geography or cartography; he began by purchasing copyrights of maps prepared by other individuals or companies, and his principal role was to manage the production and distribution of the maps.

Colton's maps, including this one, were extremely popular in the 19th-century for their detail and durability. This Civil War-era atlas includes impressive, color maps of the United States. This atlas is notable for, according to Wheat, including the first map of Montana.

Fort Point Light is a decommissioned lighthouse built on the third tier of Fort Point, which is now directly beneath the south anchorage of the Golden Gate Bridge in San Francisco, California. The lighthouse is at the south end of the narrowest part of Golden Gate strait. It was preceded by two other lighthouses in nearby locations. The present lighthouse was in operation from 1864 until 1934.

Seller rating:
This seller has earned a 4 of 5 Stars rating from Biblio customers.
Biblio.com member since 2018
COLUMBIA, Missouri
Ask Seller a Question

New
A new book is a book previously not circulated to a buyer. Although a new book is typically free of any faults or defects,... [More]
tight
Used to mean that the binding of a book has not been overly loosened by frequent use.
octavo
Another of the terms referring to page or book size, octavo refers to a standard printer's sheet folded four times, producing... [More]