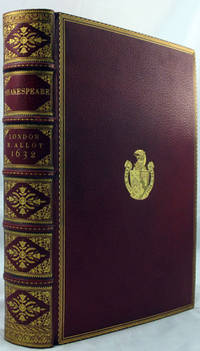 COMEDIES, HISTORIES, AND TRAGEDIES. Published according to the true Originall Copies. The second Impression

COMEDIES, HISTORIES, AND TRAGEDIES. Published according to the true Originall Copies. The second Impression

London: Printed by Tho. Cotes, for Robert Allot, and are to be sold at his shop at the signe of the Blacke Beare in Pauls Church-yard, 1632. Second Folio edition of what is generally considered to be the most important work of literature in the English language. Engraved portrait by Martin Droeshout on title page, woodcut ornaments and initials. Folio (335x220 mm), very fine full crimson morocco by Lloyd, the covers beautifully decorated with three gilt fillet lines at the border surrounded by a key rolled border gilt, and with central gilt heraldic device, the spine in compartments fully tooled and elaborately and very handsomely decorated in gilt with superb tooling at the borders of the compartments and with central gilt devices exquisitely decorated in gilt, separated by raised bands gilt stopped and tooled, two compartments lettered in gilt. The turnovers and edges are fully gilt with fillet lines at the edges and elaborate gilt rolled decorative borders at the turnovers. Edges of the leaves with wide borders and virtually untrimmed, gilt An especially handsome, large and very attractive copy in a wonderful state of preservation. Fresh, clean and crisp throughout. The "To the Reader" leaf and title-page are expertly accomplished antique facsimiles on old paper and the final Cymbeline leaf as these, all done many years ago in completely unobtrusive and very skilled workmanship. A RARE AND ESPECIALLY BEAUTIFUL COPY OF THE SECOND FOLIO. And a most desirable copy.
A Shakespeare folio is one of the most significant books for a collector of literature, and the Second Folio is the earliest copy still generally available to him or her, as most of the First Folios, of course, reside in institutional hands.
The second folio is also significant for Milton collectors as it includes, on the Effigies leaf, his first published poem, entitled "An Epitaph on the admirable Dramaticke Poet, W. Shakespeare."
The original folio printing of Shakespeare's works in all likelihood owes its existence to two of the Bard's principle actors, Henry Condell and John Heminges. Prior to the first folio there had been only a few "curious and rather shabby" collections of Shakespearian and non-Shakespearian works published under the bard's name. After Shakespeare's death Condell and Heminges dedicated themselves to producing a folio volume of all of his plays that would be accurate and authoritative "..only to keep the memory of so worthy a friend and fellow alive as was our Shakespeare." Their dedication, combined with help from others, eventually led to the publication of the First Folio in 1623. Without the hard work of these friends there is no knowing how many of the plays might have been lost in the years that followed. These two actor's work not only preserved the memory of their great friend but is perhaps the single most important publishing endeavor of English literature. How much the modern English-speaking world owes to these two men will never be calculable.
The Second Folio contains JOHN MILTON S FIRST APPEARANCE IN PRINT: an epitaph on Shakespeare in 16 verses, incipit: What neede my Shakespeare for his honour'd bones; it appears on the same page A5r as "Upon the Effigies" in eight verses, incipit: Spectator, this Lifes Shaddow is; To see. The inner form containing these two poems is recorded in several states (in the Bruce copy: "Comicke" in line 3, "Laugh" in line 4, "passions" with ligatured double-s in line 6 of the "Effigies" poem); the outer form contains the title (A2r), whose setting varies according to the publisher in the imprint. Like its predecessor, from which the edition was set page-for-page, the Second Folio has now become extremely elusive in the open market. Copies as beautiful as this are highly desirable.

COLLATION:A6*4 (A1r blank, A1v Ben Jonson's verses To the Reader, A2r letterpress title and Martin Droeshout's engraved portrait of the playwright, verso blank, A3 editors' dedication to the Earls of Pembroke and Montgomery, A4r editors' note To the great variety of Readers, verso blank, A5 r verses Upon the Effigies of my worthy Friend, the Author Master William Shakespeare and An Epitaph on the admirable Dramaticke Poet, W. Shakespeare [the latter by John Milton (1608-743], verso blank, A6r verses To the memorie of the deceased Authorby L.DignesanUl.M.,versoblank,*1rTheNamesofthePriPcipall Actors in all these Playes, verso blank, *2 Ben Jonsons verses To the memory of my beloved, The Author, *3 verses On Worthy Master Shakespeare and his Poems by l.M.S., *4r Hugh Holland's verses Upon the Lines and Life of the Famous Scenicke Poet, *4v A Catalogue of all the Comedies, Histories, and Tragedies contained in this Booke); 2A-Z6, Aa - Bb6 Cc2 (Comedies: 2A1r The Tempest, B4v The Two Gentlemen of Verona, D2r The Merry Wives of Windsor, F1r Measure for Measure, H1r The Comedie of Errors, I3r Much a doe about Nothing, Llv Loves Labour's lost, Nlr A MidSommer Nights Dredme, 04rThe Merchant Of Venice, Q3r As you like it, S2v The Taming of the Shrew, V1v All s Well, that Ends Well, Y2r Twelfe Night, Or who you will, Z6v blank, Aa1r The Winters Tale, Cc2v blank); a_y6 (Histories: a1r The life and death of King John, b6r The Life and Death of King Richard the Second, d5v The First Part of Henry the Fourth, with the Life and Death of Henry Sirnamed Hot-spurre, f6v The Second Part of Henry the Fourth, Containing his Death and the Coronation of King Henry the Fift, i2r Epiiogue, i2v The Actors Names, i3r The Life of King Henry the Fift, l4v The first Part of King Henry the Sixt, n4v The second Part of King Henry the Sixt, with the death of the Good Duke Humfrey, p6r The third Part of King Henry the Sixt, with the death of the Duke of Yorke, s1r The Tragedy of Richard the Third: with the Landing of Eorie Richmond, and the Battell of BosworÉh Field, u5r The Famous History of the Life of King Henry the Eight); aa-zz aaa-ccc6 ddd~ (Tragedies: aalr The Prologue, aa1v The Tragedie of Troyiusand Cressida, cc3v The Tragedy of Coriolaous, ee6v The Lamentabie Tragedy of Titus Andronicus, gg5v The Tragodie of Romeo and Juliet, ii6r The Lifeof Tymon of Athens, ll4v The Actors Names, ll5r The Tragedieof Jlullus Caesar, nn4r The Tragedie of Macbeth, pp2v The Tragedy of Hamlet, Prince of Denmarke, rr6r The Tragedie of King Lear, vv1v The Tragedy of Othelio, the Moore of Venice, yy4v The Tragedy of Anthony, and Cleopatra, bbbir The Tragody o Cymbeiine, ddd4r colophan, verso blank).

(US)
Bookseller Inventory #
21309
Title
COMEDIES, HISTORIES, AND TRAGEDIES. Published according to the true Originall Copies. The second Impression
Author
Shakespeare William
Book condition
Used
Binding
Hardcover
Publisher
Printed by Tho. Cotes, for Robert Allot, and are to be sold at his shop at the signe of the Blacke Beare in Pauls Church-yard
Place of Publication
London
Date published
1632

30 day return guarantee, with full refund including shipping costs for up to 30 days after delivery if an item arrives misdescribed or damaged. But, please do contact us as soon as possible if you wish to return an item. For items that are correctly described and being returned for other reasons please contact us as soon as possible and return the book in the condition it arrived to you within 7 days. For such returns the refund of postage is at our discretion.

Seller rating:
This seller has earned a 5 of 5 Stars rating from Biblio customers.
Biblio.com member since: 2009
Newburyport, Massachusetts
Ask Seller a Question

Buddenbrooks has one of the finest collections of landmark, rare books and manuscripts in the world. Our intention is to provide great books or manuscripts in excellent condition. We enjoy sharing our passion and expertise with anyone interested in fine and rare books. And we also look forward to the opportunity to meet you. We maintain premises in the heart of historic Newburyport which are reminiscent of a European style librarie. We encourage you to visit our shop where books are beautifully presented in fine library cabinets in a sophisticated environment. We are also available by appointment only to meet with clients in Boston, where we also have maintained a presence for over 40 years. If you see an item which interests you or if you would like to learn more about our offerings, please contact us via telephone, fax or e-mail.

title page
A page at the front of a book which may contain the title of the book, any subtitles, the authors, contributors, editors, the...[more]
leaves
Very generally, "leaves" refers to the pages of a book, as in the common phrase, "loose-leaf pages." A leaf is a single sheet...[more]
morocco
Morocco is a style of leather book binding that is usually made with goatskin, as it is durable and easy to dye. (see also...[more]
verso
The page bound on the left side of a book, opposite to the recto page.
fine
A book in fine condition exhibits no flaws. A fine condition book closely approaches As New condition, but may lack the...[more]
gilt
The decorative application of gold or gold coloring to a portion of a book on the spine, edges of the text block, or an inlay in...[more]
device
Especially for older books, a printer's device refers to an identifying mark, also sometimes called a printer's mark, on the...[more]
crisp
A term often used to indicate a book's new-like condition. Indicates that the hinges are not loosened. A book described as crisp...[more]
spine
The outer portion of a book which covers the actual binding. The spine usually faces outward when a book is placed on a shelf....[more]
folio
A folio usually indicates a large book size of 15" in height or larger when used in the context of a book description....[more]
edges
The collective of the top, fore and bottom edges of the text block of the book, being that part of the edges of the pages of a...[more]
rolled
rolled spine or spine rolled. Damage to a book created by pressure to the spine making it fold or crease in the cover. Damage...[more]
raised band(s)
Raised bands refer to the ridges that protrude slightly from the spine on leather bound books.  The bands are created...[more]