Home rare books Americana More Rare Books from The Lawbook Exchange Ltd Commentaries on the Laws of England. Re-Printed From the British Copy 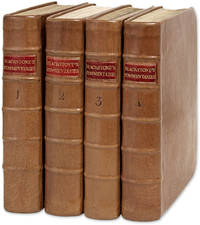 Commentaries on the Laws of England. Re-Printed From the British Copy

Commentaries on the Laws of England. Re-Printed From the British Copy

1771. 4 Vols. America [Philadelphia] 1771-1772. Eller 80. 4 Vols. America [Philadelphia] 1771-1772. Eller 80. The First American Edition of Blackstone's Commentaries in a Superb Period-Style Binding [C] Blackstone, Sir William [1723-1780]. Commentaries on the Laws of England. In Four Books. Re-Printed From the British Copy, Page for Page with the Last Edition. America [Philadelphia]: Robert Bell, 1771-1772. Four volumes. [viii], ii, [vi], 485; [viii], 520, xix; [viii], 455, [1], xxvii; [xxii], [viii], 436, vii, [1], [39] pp. Copperplate Table Of Consanguinity and copperplate folding Table of Descents in Volume II. Folding table is a high-quality bound-in facsimile. 22-page subscriber list in Volume IV. Publisher advertisements in Volume I, 2 leaves before title page, Volume III, p.456., Volume IV, tipped-in to front endleaf. Octavo (9" x 5-3/4"). Handsome period style calf by Philip Dusel, with raised bands, lettering pieces and blind-stamped volume numbers to spines, blind tooling to board edges, endpapers renewed. Moderate toning, light foxing, faint dampspotting and inkspots in places, early owner signatures to preliminaries of Volumes I, III and IV, paper repair to title page of Volume II and chip to fore-edge of Leaf Q2 (pp. 125-126) in Volume IV with negligible loss to text. An appealing copy in a superb binding. $12,500. * First American edition. Blackstone's Commentaries, a synoptic review of the English legal system, is the most influential publication in the history of modern Anglo-American law. It was especially popular in America, where it was the standard introductory legal textbook into the late nineteenth century and was the primary, or only, book studied by hundreds of self-taught lawyers, such as Abraham Lincoln. The first multi-volume book printed in America, Bell's edition, a reprint of the fourth London edition, 1770, is a landmark in the history of American publishing. Our set contains the two tipped-in advertisement leaves, for An Interesting Appendix (Volume III) and Ferguson's Essay on the History of Civil Society (Volume IV), that are often missing in copies of this set. Volume IV also includes a 22-page subscriber list of 839 men, who ordered 1,557 sets. This impressive group included John Adams, John Jay, John Dickinson, several colonial governors and many other leaders of colonial America. Sixteen subscribers were signers of the Declaration of Independence who went on to.

leaves
Very generally, "leaves" refers to the pages of a book, as in the common phrase, "loose-leaf pages." A leaf is a single sheet... [More]
raised band(s)
Raised bands refer to the ridges that protrude slightly from the spine on leather bound books.  The bands are created... [More]
edges
The collective of the top, fore and bottom edges of the text block of the book, being that part of the edges of the pages of a... [More]
calf
Calf or calf hide is a common form of leather binding.  Calf binding is naturally a light brown but there are ways to treat... [More]
facsimile
An exact copy of an original work. In books, it refers to a copy or reproduction, as accurate as possible, of an original... [More]
octavo
Another of the terms referring to page or book size, octavo refers to a standard printer's sheet folded four times, producing... [More]
title page
A page at the front of a book which may contain the title of the book, any subtitles, the authors, contributors, editors, the... [More]
reprint
Any printing of a book which follows the original edition. By definition, a reprint is not a first edition.