Home Archives Fine Books The Complaint and the Consolation; or, Night Thoughts 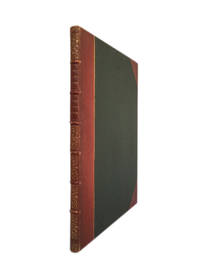 The Complaint and the Consolation; or, Night Thoughts

The Complaint and the Consolation; or, Night Thoughts

London: R. Noble, 1797. First Edition. Very good. William Blake. Large quarto, viii, [1], 95, [2] pages; with 43 full-page engravings by Blake after his own designs surrounding the letterpress text. Half red hard grain morocco, gilt on the spine, gilt edges, marbled endpapers, a.e.g. "Explanation" leaf mounted at the front (lightly foxed), 1874 prospectus mounted at the back; slightly trimmed for gilding, stain at foot of p. viii, slight offsetting as often from the plates, slight mark at the top right corner of the first few leaves (from the turning of pages). Occasional other marks - 1cm diameter mark at the foot of the inner margin pp88 through to the end, and three light smudges of what appears to be light brown ink at the foot of p.95. Generally a very good copy. First edition with Blake's illustrations, complete with the leaf of "Explanations" and with the extremely rare prospectus and specimen leaf at the back dated London: James Bain, 1874, soliciting subscriptions for sets of the original watercolours in reproduction (never issued). "A few sets are struck off for private distribution". Bentley (Blake Books p. 646) records one known copy (at Rosenbach). First advertised as a four part work with 150 engravings, only the first part appeared, with four out of nine nights. According to Bentley the edition may have been small for, "the book had become excessivley scarce by 1810, according to Crabb Robnson (Blake Records 441)" (BB, p638). Bentley, Blake Books, 515. Bindman, Complete Graphic Works of Blake, 357-379.

Seller rating:
This seller has earned a 5 of 5 Stars rating from Biblio customers.
Biblio.com member since: 2021
Brisbane, Queensland
Ask Seller a Question

Archives Fine Books has been serving readers, collectors and institutions since 1985. Located in a heritage listed building in the heart of Brisbane's business district, it boasts a large inventory of fine second hand, collectible and rare books.

quarto
The term quarto is used to describe a page or book size. A printed sheet is made with four pages of text on each side, and the...[more]
spine
The outer portion of a book which covers the actual binding. The spine usually faces outward when a book is placed on a shelf....[more]
edges
The collective of the top, fore and bottom edges of the text block of the book, being that part of the edges of the pages of a...[more]
leaves
Very generally, "leaves" refers to the pages of a book, as in the common phrase, "loose-leaf pages." A leaf is a single sheet...[more]
morocco
Morocco is a style of leather book binding that is usually made with goatskin, as it is durable and easy to dye. (see also...[more]
First Edition
In book collecting, the first edition is the earliest published form of a book. A book may have more than one first edition in...[more]
gilt
The decorative application of gold or gold coloring to a portion of a book on the spine, edges of the text block, or an inlay in...[more]