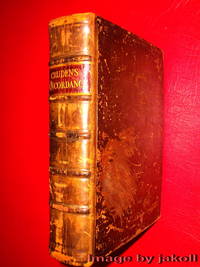 A COMPLETE CONCORDANCE TO THE HOLY SCRIPTURES OF THE OLD AND NEW TESTAMENT: in two parts.

A COMPLETE CONCORDANCE TO THE HOLY SCRIPTURES OF THE OLD AND NEW TESTAMENT: in two parts.

Payment must be received within 7 working days. Payments by cheque will be held 10 working days to clear. Full refund of purchase price only if item has been misdescribed as pertains to condition. Mailing costs non-refundable. Item must be returned in the same condition as it was originally sent out for refund conditions to apply.

Seller rating:
This seller has earned a 5 of 5 Stars rating from Biblio customers.
Biblio.com member since: 2007
Mansonville, Quebec
Ask Seller a Question

We specialize in Modern 1st Edition, Children's books, Vintage classics, vinyl records, original movie posters, sports cards, comics, postage stamps and coins.We only sell online at this time and have been doing so for over 30 years.

New
A new book is a book previously not circulated to a buyer. Although a new book is typically free of any faults or defects,...[more]
tight
Used to mean that the binding of a book has not been overly loosened by frequent use.
raised band(s)
Raised bands refer to the ridges that protrude slightly from the spine on leather bound books.  The bands are created...[more]
spine
The outer portion of a book which covers the actual binding. The spine usually faces outward when a book is placed on a shelf....[more]
jacket
Sometimes used as another term for dust jacket, a protective and often decorative wrapper, usually made of paper which wraps...[more]
gilt
The decorative application of gold or gold coloring to a portion of a book on the spine, edges of the text block, or an inlay in...[more]
G
Good describes the average used and worn book that has all pages or leaves present. Any defects must be noted. (as defined...[more]
1st thus
Indicates that this is not the first appearance of a book in print, but that this is the first appearance in a substantially...[more]
calf
Calf or calf hide is a common form of leather binding.  Calf binding is naturally a light brown but there are ways to treat...[more]

More books like this are on sale from jakoll at 20% off!