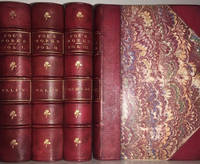 THE COMPLETE WORKS OF EDGAR ALLAN POEBound in the original leather bindings.Edited by John Ingram.With A Memoir.This is the FIRST EDITION of 'The Ingram Edition' of Poe.Printed in 1874 - 1875.
IN REMARKABLE CONDITION, despite being almost 150 years old.A truly gorgeous and exceptional antiquarian set of Poe.
Complete in 4-Volumes.Illustrated with frontisplates.
This is the FIRST EDITION of John Ingram's edition of Edgar Allan Poe.J. H. Ingram dedicated himself to the resurrection of Poe's reputation, maligned by the dubious memoirs of Rufus Wilmot Griswold; he published the first reliable biography of the author (included in this set) and a four volume collection of his works.________________________Rescuing Poe's reputation, both personal and literary, from the clutches of Griswold became the self-imposed mission of a single-minded Englishman named John Henry Ingram (1842-1916).
Beginning in 1874, his sympathetic memoir of Poe began to replace the malicious one that had been written by R. W. Griswold. Although it had intermitant competition from memoirs written by W. F. Gill, R. H. Stoddard, E. L. Didier, and others, Ingram's memoir was the one most widely reprinted, appearing in various forms throughout the remainder of the 19th century.

CONDITION: In VERY GOOD condition despite it's age. This set is in remarkable condition despite being almost 150 years old. Early sets of Poe are exceedingly difficult to obtain, let alone so well preserved. This set is complete. These are the original bindings from 1875. The hinges are all strongly and fully attached. This set is in exceptional condition. The bindings have some generalized wear and abrasions as is shown in the pictures. Printed on quality paper. This is a gorgeous antiquarian set of Edgar Allan Poe.
The Works of Edgar Allan Poe, edited by John H. Ingram. Edinburgh: Adam and Charles Black, 1874-75.

Four volume set (Volume I, Memoir-Tales; Volume II, Tales-Continued; Volume III, Poems and Essays; Volume IV, Autobiography, Criticisms, and Index). Bound in contemporary half red morocco over marbled paper-covered boards, all edges marbled, marbled endpapers. Volume I with frontispiece portrait of Poe, volume II with frontispiece illustration from 'Arthur Gordon Pym' (and both with tissue guards). Ingram's memoir of Poe worked to rehabilitate the author's image from the one presented by Rufus Wilmot Griswold, and would be widely reprinted in the latter part of the 19th century.

This would make an excellent gift and/or addition to any fine library.
In addition to their shelf presence, Rare & Antiquarian Books make a great investment.

I always pack very securely to ensure safe arrival at your doorstep.
All books are individually wrapped and professionally padded.

morocco
Morocco is a style of leather book binding that is usually made with goatskin, as it is durable and easy to dye. (see also...[more]
edges
The collective of the top, fore and bottom edges of the text block of the book, being that part of the edges of the pages of a...[more]
First Edition
In book collecting, the first edition is the earliest published form of a book. A book may have more than one first edition in...[more]
remainder
Book(s) which are sold at a very deep discount to alleviate publisher overstock. Often, though not always, they have a remainder...[more]
fine
A book in fine condition exhibits no flaws. A fine condition book closely approaches As New condition, but may lack the...[more]